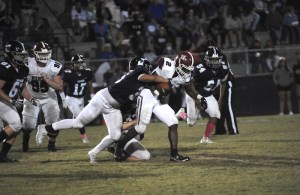 The Shelby County High Wildcats overpowered the Jemison Panthers Friday night, 34-6, to set a major team milestone, clinching a spot in the playoffs for ... Read more

Talented people, especially in the entertainment business, often use their gifts for monetary gain or to make a name for themselves. But when Dr. David ... Read more

Chilton County Schools will get 17 new school buses for the 2016-2017 school year, and one additional bus route in Clanton. The new buses include ... Read more

blast from the past

“I feel very elated that this community has stepped up and is continuing to step up in raising the funds for these seats,” Cynthia Stewart ... Read more

“Gourds have been in every society from the beginning of time. It’s nothing new. It’s one of the oldest continuously living plants still alive,” Mack ... Read more

The owners of the forthcoming Bertolone Italian Café in downtown Clanton have set their sights on a tentative opening date of Dec. 15. “If I ... Read more

Scottish singer-songwriter Jim Malcolm will perform Sunday night, Nov. 15 at Chestnut Creek Heritage Chapel from 6-8. Known as “one of the finest singers in ... Read more

Former Maplesville athlete Rishard Davis was inducted into the Huntingdon College Athletic Hall of Fame this month. Davis, a 2009 alumnus of Huntingdon, was a ... Read more

Clanton motorists can breathe a sigh of relief Friday, as the intersection of U.S. 31 and Alabama 22 is set to re-open after nearly six ... Read more

The Chilton County Fair will return Tuesday evening, Sept. 29 and last through Saturday, Oct. 3. For the second consecutive year, the fair will be ... Read more

Chilton County Sheriff’s Reports for the week of July 10, 2012

The following is an activity report of the Chilton County Sheriff’s Department from June 27-July 3. Read more