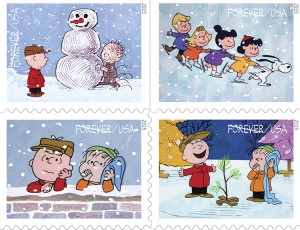 Among the new stamps available for the Christmas season are those commemorating “A Charlie Brown Christmas.” (United States Post Office)

“A Charlie Brown Christmas” stamps—which feature still frames from the animated TV series of the same name—seem to be the most sought-after. The high demand could be partly attributed to the upcoming “The Peanuts Movie” set for theatrical release on Friday.

“Most people are asking for those,” said Clanton Post Office clerk Rena Crumpton. “We have our stamps here and you can come get them early.”

Crumpton indicated the most popular stamps will likely run out early, but more can be ordered. These are available at any local post office or at usps.com.

Each individual stamp costs the First-Class postage rate of 49 cents, or $9.80 per sheet of 20. All of the new issues are forever stamps, which means each stamp can be used to mail a one-ounce letter regardless of when the stamps were purchased, even if the price of postage goes up.

Crumpton said less and less people are mailing Christmas cards each year, which could be due to social media and smart phone apps. But she encourages people to send season’s greetings the old-fashioned way.