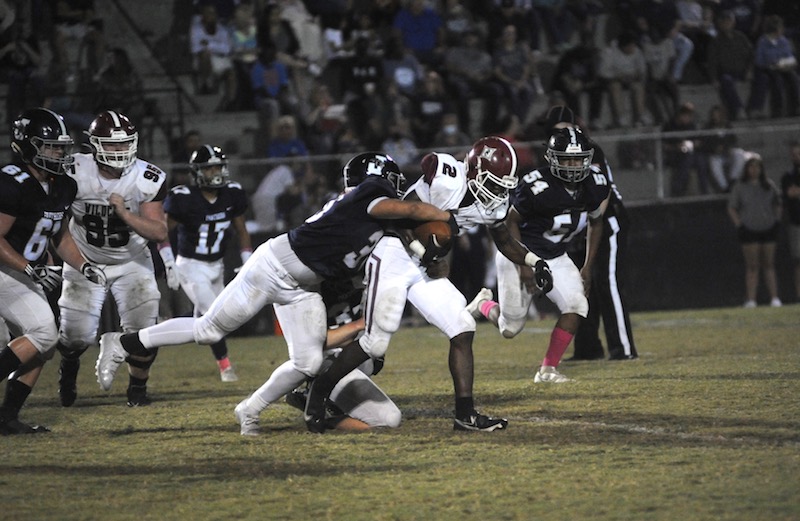 The Shelby County High Wildcats overpowered the Jemison Panthers Friday night, 34-6, to set a major team milestone, clinching a spot in the playoffs for the first time in 11 years.

The Wildcat offense was working like a well-oiled machine, putting Jemison at a major disadvantage when it came to turnovers and possession time.

“Hats off to Shelby County. They’ve got a really good team,” said Jemison coach Blake Bradley. “We had a lot of errors, a lot of mistakes on offense tonight. We dropped a lot of passes, which didn’t help us. We kept our defense on the field a lot, which was really tough to overcome.”

Bradley, in his second year as head coach at Jemison, praised his players for their efforts this year.

“I’m proud of our guys, the fight they’ve had to get to this point, to even make a run at making the playoffs,” he said. “Our younger guys, we’ve got a lot of work to do but the seniors have laid the foundation for what’s coming.”

Shelby’s Evan Joiner broke the ice in the first quarter with a touchdown, and Jemison’s Ryan Harris answered with 2:11 in the first. Jemison attempted a 2-point conversion but came up short.

With just 27 seconds left in the first, an Isaac Montgomery reception set the stage for another Joiner TD, making the score 14-6 Shelby County.

The Panthers threatened deep in Wildcat territory but failed to capitalize as Shelby County took over on downs. The second quarter was uneventful, resulting in a halftime score of 14-6.

About midway through the third quarter, Shelby’s Landen Stewart hauled in a touchdown reception. Jemison’s Josh Gilliland responded with a 42-yard gain, but again the Panthers came up short in the red zone, turning the ball over on downs.

Next Joiner again dove across the goal line with 3:45 in the third. Jemison blocked the PAT, but the game was quickly slipping away from them as the Wildcats led 27-6.

Jemison’s next drive was a three-and-out, then Shelby County’s Bradley Horton crossed the goal line on a 10-yard run. This time the kick was good and the score was 34-6, which it would remain.

Shelby County coach Heath Childers said it was obviously a big night for the school, the program and the community.

“It’s been 11 years since we’ve been in the playoffs, and this win tonight punched our ticket,” Childers said after the game. “I’m so proud for our players. They’ve worked hard, and they’ve stayed the course and they’ve earned it.”

He was quick to praise wide receiver Isaac Montgomery for making two big-time catches in the first half and for getting the Wildcats’ momentum going strong.

“He makes big plays for us, explosive plays,” said Childers, adding, “I thought the offensive line played extremely well tonight, especially being banged up and being a little shorthanded. The running backs played well. They ran the ball hard, defensively we were good. It was just a great team effort.”

Next week the Panthers travel to Elmore County, as Shelby County goes on the road to face Talladega.