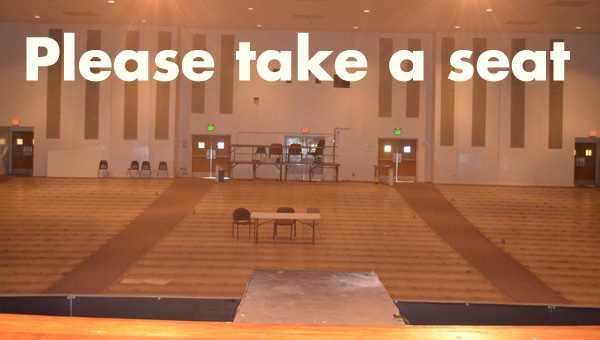 Empty feeling: The old seats have been removed from the Chilton County High School auditorium. (Photo by Scott Mims)

Right now, in the Chilton County High School auditorium, there is not an empty seat in the house.

In fact, there is not hardly a seat of any kind to be found.

Thanks to ongoing school fund-raising efforts, including “Blast From the Past,” the seats have been removed from the facility for a complete overhaul as part of a renovation project dubbed “Save-A-Seat.”

As CCHS’s 100th graduating class approaches, the school is calling upon alumni, friends, parents and community members to contribute to the project, which will cost more than $144,000.

CCHS Principal Dr. Cynthia Stewart expressed excitement that the project is ahead of schedule, after just a year of fundraising.

“I feel very elated that this community has stepped up and is continuing to step up in raising the funds for these seats,” Stewart said.

Anyone who has attended CCHS knows that the seats in the auditorium are not just seats. Every year, one of the most sacred traditions at CCHS is when the outgoing senior class “officially” turns over the coveted senior seats, located in the front center section, to the next senior class. When the announcement is made, members of the incoming senior class quickly take possession of their new seats amid shouts of excitement. 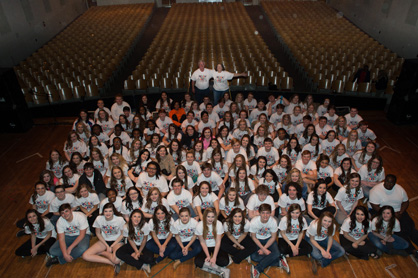 Blast crew: The Blast from the Past crew is shown in front of the old auditorium seats. The show helped raise money for the seat project. (Photo by Tammy Gentry / Looking Glass Photography)

Since the facility was constructed in 1962, the auditorium seating had been virtually untouched, aside from minor repairs. This led to deterioration of the existing seats, to the point that some could not be used.

“The old seat frames are sound but the leather is badly worn and torn,” said Sheri McKee, member of the school’s Capital Campaign Committee. “Many seats are totally missing their covering. The springs are poking through in many seats.”

Now, the steel and wooden frames of the old seats will be getting brand new springs and cushions. This option was favored over all-new seating, which would likely have had plastic frames. The company refurbishing the seats is Red Hill Renovators of School Furniture.

In addition to the seats, the total project cost includes new floor tiling, carpet and improvements to the sound booth.

The auditorium is expected to be ready for use again by May 1.

About $13,000 in profits from this year’s “Blast From the Past” will be donated to Save-A-Seat. “Blast” coordinators Ricki and Sheri McKee said participating students donated major energy and time outside of regular school activities and athletic practices.

“Blast” is the school’s biggest fundraiser and features students singing and dancing choreographed performances to hit songs from the past.

“The cast and crew is made up of a variety of ability levels, and it takes all 125 of them working together to make this production successful,” Sheri McKee said. “Cast and crew members sang, danced, painted, moved props, listened to Mr. McKee’s stories, practiced until they were excellent, sold tickets, handed out programs, helped people find their seats and performed.”

She said Ricki’s mother, Kelli McKee, worked countless hours more than 50 years ago to help make the school’s auditorium an integral part of the community.

“I am so proud that Ricki and I have been able to continue her good work over the years but I had given up on ever finding a way to maintain the auditorium by replacing these badly worn seats,” McKee said. “Dr. Stewart didn’t give up. It was her belief in CCHS, its alumni and this wonderful town that brought us to this point.”

Proceeds from an upcoming alumni dinner on April 8 also will benefit the project. The event, to be held at the Clanton Conference and Performing Arts Center beginning at 5:30 p.m., will include a dinner, silent auction and live auction. Tickets are available at the school office, MorLyn’s downtown or from any CCHS Student Government Association member. The SGA is sponsoring the event.

Stewart said there are thousands of CCHS graduates who have the opportunity to be part of the important work being done.

If you are interested in donating, a gift of $150 will cover one auditorium seat. Any donation amount will be accepted. A donor plaque with names of all donors ($50 minimum) will be permanently displayed in the lobby outside the auditorium entrance.

“Over the past year many people have asked about the progress of the Save-A-Seat Campaign. When I have given them the update, many of them have responded, ‘I keep forgetting to send that donation. I’ve got to do that,’ said Ricki McKee. “Now is certainly the time to send that donation and to take part in the auction on April 8. I’m so excited for the school and our entire community as this project nears completion.”