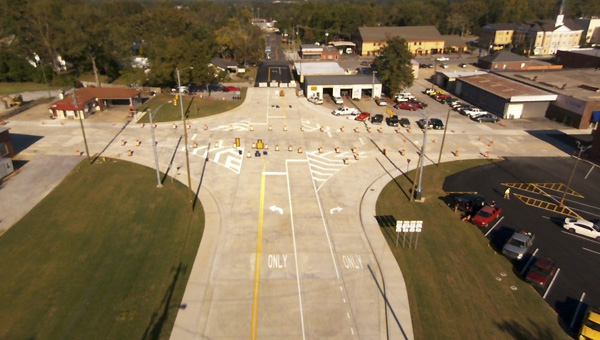 An aerial shot looks east across U.S. 31 at the newly improved intersection with Alabama 22 in downtown Clanton. The highways double as Seventh Street and Fourth Avenue North, respectively. (Contributed)

Clanton motorists can breathe a sigh of relief Friday, as the intersection of U.S. 31 and Alabama 22 is set to re-open after nearly six months of construction.

Local and state officials will host an opening ceremony at 3:30 p.m. Friday, Oct. 16 at the site of the newly widened intersection. Members of the general public are welcome to attend the ceremony.

“I think it’s a great addition to the city of Clanton to help folks maneuver through town,” said Clanton Mayor Billy Joe Driver. “I look forward to seeing how it will help us.”

Driver thanked the Alabama Department of Transportation (ALDOT) and Chilton Contractors for completing the project ahead of schedule, and he expressed thanks to the general public, including local and out-of-town motorists, for their patience while the intersection was widened.

“I think it will be worth it in the long run,” he said.

The intersection is opening 50 days earlier than the contract end date and one day earlier than the original completion date of Oct. 17. The project was delayed in May when work was temporarily halted by a drainage issue.

Improvements include additional turning lanes in all directions, general widening of the intersection, new traffic signals, and concrete pavement instead of asphalt. A video detection system will also help control the flow of traffic.

“This is one of the few completely concrete intersections in the state of Alabama,” said Trent Plier, project manager with Chilton Contractors.

All that remains to be completed, Plier said, is the installation of state right-of-way monuments, striping and general cleanup. Permanent striping will be added in approximately one and a half weeks.

“We’re just excited to get it open and hopefully please the public,” Plier said. “We would like to invite everyone to join us on this exciting day for not only Chilton Contractors but also for the city of Clanton and local businesses.”