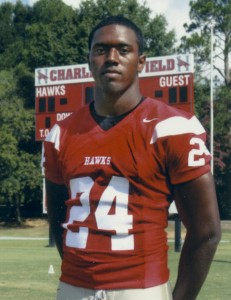 Davis, a 2009 alumnus of Huntingdon, was a standout football, basketball and baseball player at Maplesville High School. Following graduation, he played for the University of Arizona football team for a year before transferring to Huntingdon College in Montgomery.

“It is a pleasure and honor to be inducted into the Hall of Fame,” Davis said. “Words cannot describe the events that took place in my life leading up to Huntingdon, and to where I am now.”

Davis fondly recalls growing up in the high-energy atmosphere of Maplesville Red Devil football. He started out as an offensive lineman but ended up playing linebacker and tight end.

“It’s no secret down there in Chilton County that Maplesville loves their football. It’s just the culture down there. There’s probably a kid right now watching the Maplesville players and wishing he could be them,” he said.

Davis had All-State honors going into his senior year. After graduating, he walked on at Arizona as a free safety, but a coaching change unfortunately led to his dismissal from the team.

His fortunes turned around, however, when a friend lobbied for Davis to go to Huntingdon and play for the Hawks.

“Being dismissed from the University of Arizona’s football team left me feeling worthless,” Davis said. “Transferring to Huntingdon renewed my strength, and I couldn’t do anything but give my school 100 percent of my effort and focus.”

Today, Davis coaches a high school football team and teaches mathematics at Santa Cruz Valley Union High School in Eloy, Ariz.—a school also known for its football tradition. He said he tries to instill in his players what coach Brent Hubbert and others instilled in him at Maplesville.

“Coach Hubbert, he always pushed us to be our best,” Davis said.

Of course, he also gives much credit to his upbringing and his parents, Richard and Ethel Davis.

“They were tough but fair on me my whole life. If I did something wrong, I got disciplined for it,” he said.

Davis’ high school team is in the midst of a winning season. He said the community is buzzing, and if they win Friday night, it will be the first time they have gone 7-2 since 2006.

He leaves this year’s Maplesville team with an upbeat message: