Chilton County Schools will get 17 new school buses for the 2016-2017 school year, and one additional bus route in Clanton.

The state Board of Education funds the buses through its 10-year renewal program. The approximate cost for each bus is $90,000.

“The growth in the county is unbelievable. In Jemison, it’s just crazy,” Griffin said. “In five years we have added about 10 new routes. We average adding one to two routes [per year] countywide to accommodate growth.” 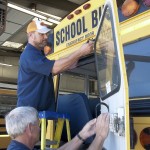 Chilton County Schools have more than 100 routes countywide, and a fleet of more than 130 buses. Buses transport about 5,000 students on any given weekday, not counting athletic trips, band trips and other activities, Griffin said.

There are 25-plus routes in Clanton, 30-plus routes in Jemison, five in Thorsby, seven in Isabella, six in Maplesville, nine in Verbena and eight special education bus routes.

The Transportation Department is currently in maintenance mode, which means the mechanics are busy changing oil, replacing headlights, washing and cleaning every bus and making sure they are ready for a new school year.

“The mechanics work diligently during summertime. That’s who’s doing most of the work,” Griffin said. “In the office we work on routes and provide information to parents, guardians and schools about which bus their students will ride in the fall.”

Griffin stressed that unless a family moves, children who rode the bus last year should be riding the same bus this upcoming school year.

“Be safe around the buses. Be careful driving and loading students,” he said.

Old buses will either be used for extracurricular activities or declared surplus and sold.