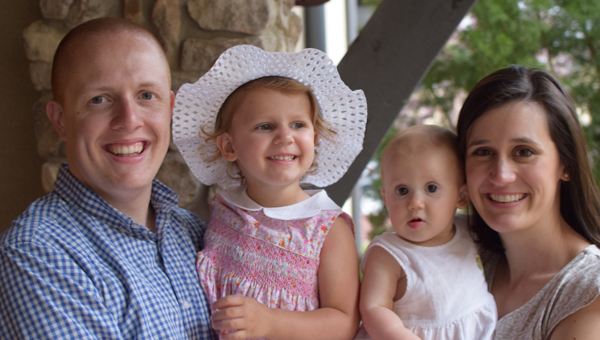 The Parnell family of Shelby County is in the process of adopting a child. Pictured are Hayes, Hannah, Norah and Bethany. (Contributed Photo)

Talented people, especially in the entertainment business, often use their gifts for monetary gain or to make a name for themselves.

But when Dr. David Wilson recorded a CD of worship music, he wanted the project to have a higher purpose — to help fulfill a very real need in the life of a local family.

Wilson, a Clanton native who resides in Chelsea, practices at Chilton Family Medicine in Clanton alongside Dr. Jeff Price. He also has what some might call a hidden talent — he plays guitar, among other instruments, sings and writes his own songs.

Up until about three years ago, Wilson’s strumming and singing was primarily an outlet for personal relaxation and reflection. But the seeds of inspiration were always there. He had listened to all different kinds of music — Johnny Cash, Willie Nelson, outlaw country, rock, Christian music and even grunge. His grandfather was a multi-instrumentalist. He even did some mixing and production for his church. Further adding to Wilson’s inspiration was his wife, Amy, who is a pianist and vocalist.

“It’s therapeutic to use lyrics and music to kind of make sense of your circumstances,” Wilson said. “You use a completely different part of your brain when you do that.”

When asked about his songwriting process, Wilson said he often starts with an idea for a song’s subject.

Wilson’s CD, “Sacred + Common,” was recorded over the past two years with assistance from a friend, George Vinson of Nashville. He describes the music as “folksy, Southern rock with Christian themes.”

The title comes from Wilson’s observations of both the sacred and the common elements of life. One example he used was of a community or a church rallying around someone who is sick.

“The longer I live, the more life fascinates me as a believer,” Wilson said. “There’s a lot of common mixed in with the sacred, and it’s fascinating to see how God can create something that has such sacred undertones but that it’s completely mixed in a world with common elements.”

As Wilson’s work came closer and closer to realization, he started wanting to use it for a higher purpose than just sharing his talents and making money. He decided to donate proceeds to two different charities — one to help a local couple adopt a child, and another in the area of music ministry.

The Wilsons have adopted two children themselves, Pierce, 7, and Lilly, 10.

“We’re very passionate about adoption and very interested in finding ways to help any family that wants to grow through adoption make that possible,” he said.

Proceeds will help the Parnell family, friends of the Wilsons from Double Oak Community Church in Chelsea, toward raising the $19,000 needed to go through the adoption process.

The other charity is Project OneFifty, a music-based ministry headed up by George Vinson.

“It’s been a blast doing it,” Wilson said.

Copies of Wilson’s music collection are available in CD form at Chilton Family Medicine’s Clanton office or in digital form through cdbaby.com or on iTunes.