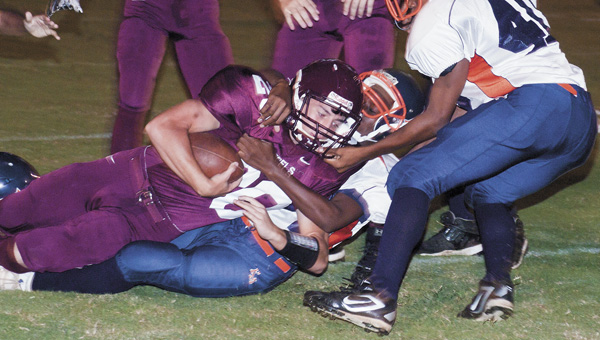 You could say Thorsby defied the odds Friday night to beat the Francis Marion Rams 37-14 to go 2-0.

The victory was sweet because the Rebels have won as many games as they won all year in 2009 — and they won Friday night with two main starters on the sidelines, Marcus Bray and Tanner Bush.

“It feels good to be 2-0, doesn’t it?” coach Billy Jackson asked the team after the game. They answered, “Yes sir.”

The first half was hard fought on both sides. Andrew Farris connected with C.J. Melendy for a 38-yard touchdown in the first, but the Rams’ LaDarius Tabb returned the ensuing kickoff for a 78-yard sprint to the end zone. Demetre Williams tacked on 2 extra points.

Thorsby gave up a fumble on its next drive but forced the Rams to punt. Then it was Farris charging over the goal line for a short TD.

In the second quarter, the rescue squad was called out to check on injured Frances Marion player Radge Turner. He got back on his feet, but a personal foul was called against Thorsby.

Tabb recovered a Thorsby fumble but the Rebels’ Bo Hoffman had a sack in the backfield. Then Trent McClain intercepted and went on to score a 41-yard touchdown.

Farris took part in Thorsby’s last three touchdowns, passing to Stephen Mims and Nathan Oldroyd for 38 and 12 yards, respectively, and running one himself from 24 yards out.

In his post-game speech, coach Billy Jackson acknowledged that the Rams (0-2) were bigger and faster than the Rebels position for position, but the Rebels played with a lot of heart and wouldn’t quit.

“They rose to the occasion tonight,” Jackson said. “We are by far not where we want to be, but we’re trying to make strides.”

When Kalup Nunn first hurt his knee last season, in Week 9 against Hale County, he was bummed about missing... read more