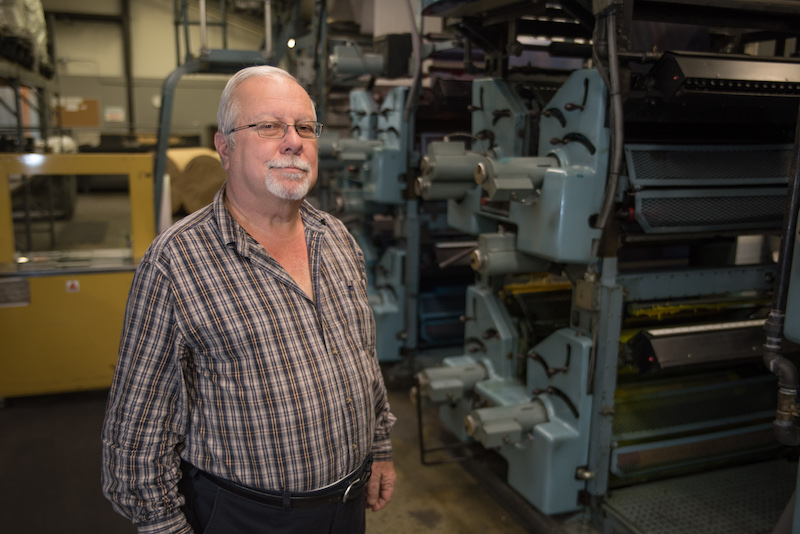 Jimmy Ruff, left, stands in The Selma-News Journal pressroom with publisher Shelton Prince in this photo from the late 1970s. (FILE)

In what seems like an end to an era for those at The Clanton Advertiser, long-time production manager Jimmy Ruff has retired. His last day at work was April 30.

Ruff, 66, belongs to a rare breed of old school, hard-working individuals. He believes in doing his job correctly and to the best of his ability, and he’ll admit that his work often comes before himself. Because of that, some see him as gruff and intimidating.

“I do intimidate some people,” Ruff said. “I have been told that by more than one person. I believe if you are going to do your job, do it. Do it right. Don’t complain, just do it. You have to do your part, and I have to do mine. I believe in doing it on time. With a newspaper, it’s a chain of events. You have to get it all put together and to the customers. Everything we do affects a lot of other people.”

Ruff is a native of Notasulga. After graduating high school, he enlisted in the United States Army. However, his father passed away while he was still in basic training, so he was granted a hardship discharge. From there, Ruff went into the workforce. He took on jobs in fields like carpentry, construction, grocery and working for a water meter company.

In October 1976, Ruff began work in the mailroom and pressroom at The Selma Times-Journal.

Ruff eventually worked his way up through the company and became press foreman, then production manager.

Fast forward to January 2003. Parent company Boone Newspapers Inc., which owns the Selma and Clanton newspapers, was building a production facility in Clanton at The Advertiser.

“Throughout my career with Boone, I have done a lot of group work and have been involved in different things,” Ruff said. “We were getting ready to install printing equipment here (in Clanton), and once we were finished, I was supposed to go back to Selma. I came here and started helping with installation, and I liked it here. I liked the facility, the town and the people. I felt like I belonged here. So, I asked for a transfer, and they granted it.”

Ruff has been production manager at The Advertiser for more than 17 years. As a retiree, Ruff will maintain his personal business helping other companies with press and printing needs and will continue as an independent consultant as group production and facilities manager for Boone Newspapers.

“I will have an office here with a phone and email address and work projects as they need me,” Ruff said. That job will be very different from the many hours he is used to working.

Ruff, who will be 67 in August, said he and the company have been through a lot together during his tenure, including a stroke and health problems with his son.

“I don’t consider myself just working for The Clanton Advertiser,” Ruff said. “I look at it as the company as a whole. I have had opportunities to leave, but I’ve never done it. Jim Boone and this company have taken care of me and my family. I can’t say enough about them, especially Mr. Boone. He takes care of me, and I take care of him and his company.”

Boone feels the same about Ruff.

“Jimmy describes our working and personal relationship well,” said Jim Boone, chairman of the board of Boone Newspapers Inc. “He and I have worked through many opportunities and problems together, and we have been blessed to have him with us. Jimmy is multi-talented and has always become proficient and expert at anything he sought to do. Such people are rare, and greatly appreciated.

“Selma was important to Jimmy, he quickly gained the late Selma publisher Shelton Prince as his mentor. Shelton brought Jimmy into press work — good for our company and for Jimmy. In recent years, Jimmy has worked closely with Tim Prince, a Boone Newspapers publisher and group manager. I wish Jimmy the best as he goes forward, appreciate and value his advice and counsel as a consultant as he and we go forward,” Boone said.

“They have helped me grow and they have given me tremendous opportunities in this company,” Ruff said. “It has been like an education. They are like family. This is my life. I have worked with some really good people. (The late) Shelton Prince as our publisher in Selma. He was a real good friend. I learned a lot from him. I worked with Jay Davis and learned a lot from him.

“Here in Clanton, I worked with Mike Kelley and Tim Prince. Brandy Clackley is great to work with. I have good relationships with both our employees and other places we print. I have met a lot of good people over the last 44 years that I have a lot of respect for…This has been my home and my life. I’m sure going to miss it, that’s for sure.”

Todd Carpenter, who is president and CEO of Boone Newspapers, has a long history with Ruff. “My first assignment with Jimmy was installation of a press in Andalusia.  That may sound like a straightforward process but it is not.  Jimmy and I worked together on that project for about a year of planning and implementation and I gained a deep respect for what he knows how to do, how he handles his responsibilities and works with people. To work with a person with such deep knowledge of his craft who matches that with high standards of doing things the right way, at the right time, every time, is an honor and a privilege.  We have been partners in such projects ever since and will be into this next phase.”

“Jimmy also has a knack for getting people out of trouble,” Carpenter said. “The biblical analogy of the ox in the ditch really fits.  Our presses are large and complicated and they must operate correctly, on time, every time.  They are easy to ‘ditch’ and sometimes difficult to get out. I learned quickly about Jimmy that if you find the ox in the ditch, look carefully because he may have beat you there to get it out.  I have never called him and not gotten an answer, no matter time of day or night, and have not asked for help that did not come more quickly and in greater measure than asked.  To borrow sports terminology, Jimmy Ruff is an MVP and a first-ballot hall of famer.”

What may best sum up Ruff’s work with Boone Newspapers is the Lifetime Achievement Award he was given by the Alabama Press Association in 2017.

He is only the second production professional to receive such an award.

The award is given to someone in the Alabama newspaper industry who has demonstrated “outstanding service and accomplishments” during a career of 25 years or more.

Tim Prince, who is a Boone Newspapers senior vice president and is publisher of The Clanton Advertiser and Shelby County Reporter, said it meant much to him when Ruff was honored by the state’s press association.

“I first met Jimmy in the pressroom of The Selma Times-Journal when I was six years old. Jimmy and my father worked together at the newspaper. As a little boy, I would watch Jimmy make this noisy, whirling machine called a printing press spin gigantic rolls of paper on one end spit out newspapers on the other. I remember gazing with amazement at what Jimmy was doing and getting done — I still do,” Prince said.

Ruff said the honor was the high point of his career. The production team he leads has won many accolades over the years as well in APA’s Better Newspaper contest, including multiple Best Printing awards over the years.

Ruff has been in the newspaper industry long enough to have seen many changes over the years, especially where technology is concerned.

He has also helped grow the amount of printing in Clanton to more than 40 publications now.

“Since we came here, we started out with a small amount of printing,” he said. “We grew rapidly. We have become a central printing operation for Boone Newspapers and various newspapers outside of the group. As far as our equipment here, we have upgraded and computerized everything. We have a really nice operation here. We have automated throughout the time I’ve been here. As the technology has changed, we have changed with it.”

Ruff said he does not know how he will spend the extra time retirement will give him.

“I will spend some time with my wife and my son,” he said. “I used to enjoy woodworking. I may try to get my shop organized, but I don’t know. I have spent a lot of time working, really day and night seven days a week. Work has always been my No. 1 priority taking care of this company as much as I could. The last couple of weeks I have gone through so many emotions it’s unreal. I will be lost, I can tell you that much.”

Fellow employees like Clanton Advertiser General Manager Clackley will be sad to see him go.

“Upon my starting with Boone Newspapers, Jimmy’s name had already reached legendary status,” Clackley said. “The mention of his name was as familiar across the company as Mr. Boone’s. It’s been my great pleasure to work with Jimmy over the past eight years.

“I can only imagine there are countless employees he has trained and shaped into great leaders within our company today. I count myself lucky to be among that number. His daily presence will certainly be missed but the dedication he has shown will remain forever. I wish Jimmy only the best for a full and happy retirement.”

As far as leaving his long-time position goes, Ruff said he will “miss it all.