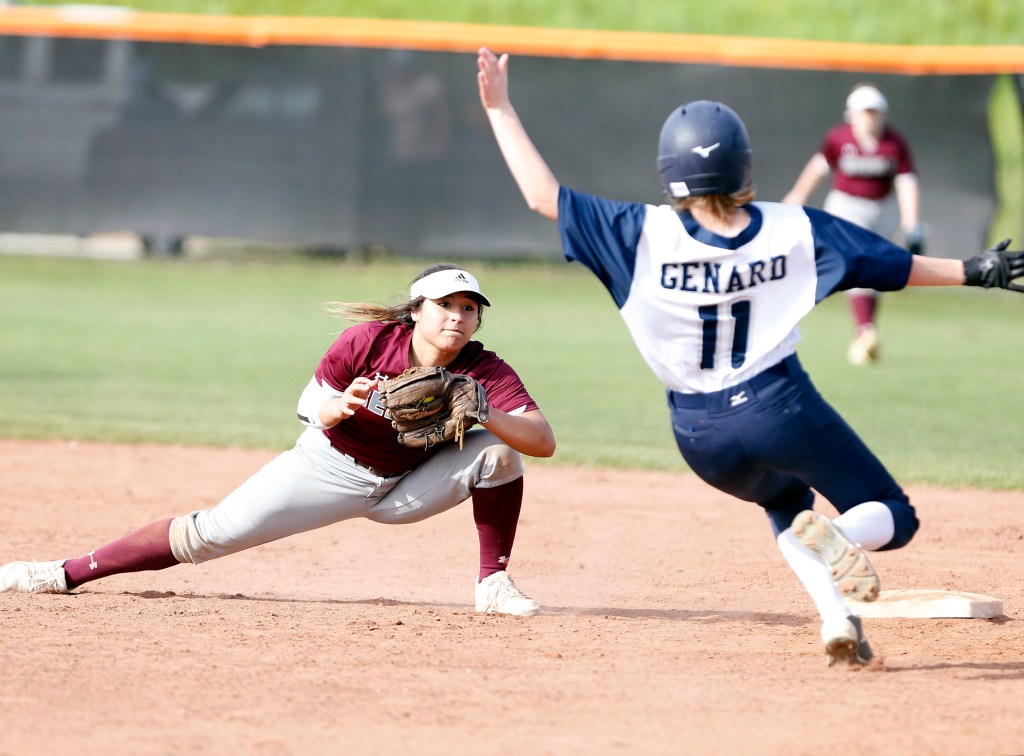 Abi Cleckler stretches in an attempt to tag out a Jemison baserunner. She played shortstop throughout the majority of her career. (FILE)

One of the things Thorsby senior softball player Abi Cleckler will remember about her playing days is the relationships and bonds that she built with her various teammates over the years.

She has created a ton of memories since she started playing softball at 5 years old.

However, her journey as a softball player did not end the way she had always imagined it would after her senior season was cut short due to the coronavirus pandemic.

“I feel every senior looks forward to that final year,” Cleckler said. “It was hard to hear.”

According to Cleckler, she first got word that the season could be in jeopardy from head coach Hannah Strength during the county tournament in March.

It was a shock to Cleckler, who had started at the varsity level since seventh grade.

Since the season was cancelled she has had time to look back and realized that she would not trade the adversity she faced as a young player on varsity.

“It was a challenge for myself, but it helped me become the type of player I am,” Cleckler said.

Not easily backing away from challenges is the reason Cleckler enjoyed playing shortstop, which is a position that typically sees a lot of action.

“It’s my favorite position,” Cleckler said. “I feel like you’re the main one talking and helping everyone else out.”

Because a lot of balls are hit to shortstop, she was always looking for ways to improve her lateral movement and reaction time.

“Moving my feet and getting quicker was always the goal,” Cleckler said.

Being a senior was neat for Cleckler, who embraced the role of being a leader and the added pressure that came with it at times.

“I felt like the younger girls looked up to me more,” Cleckler said. “I love the pressure, because it motivates me to do better each time out.”

Thorsby softball has produced some good teams in recent years and has played in some pressure-packed games with high stakes on the line as a result.

One of the reasons for the success is the Rebels’ ability to score runs in bunches at times over the years.

As the leadoff hitter, Cleckler was oftentimes a tone-setter for such hit barrages.

“I felt that when the beginning of our lineup hits, everyone else hits,” Cleckler said. “When I’m at the plate, I’m just trying to do whatever I have to do to get on base.”

Throughout Cleckler’s softball career she played alongside her twin sister Ashly, who played second base.

However, Ashly did not play softball this year, which meant that the season started just as strange as it ended and was just another thing Abi had to adjust to.

“It was fun over the years, because we would always pick on each other,” Abi Cleckler said. “At times, I pictured that she was out there.”

She thanked all the coaches that have provided the necessary teaching to make her the player she turned out to be.

“There are too many to name, but I thank them all,” Cleckler said.