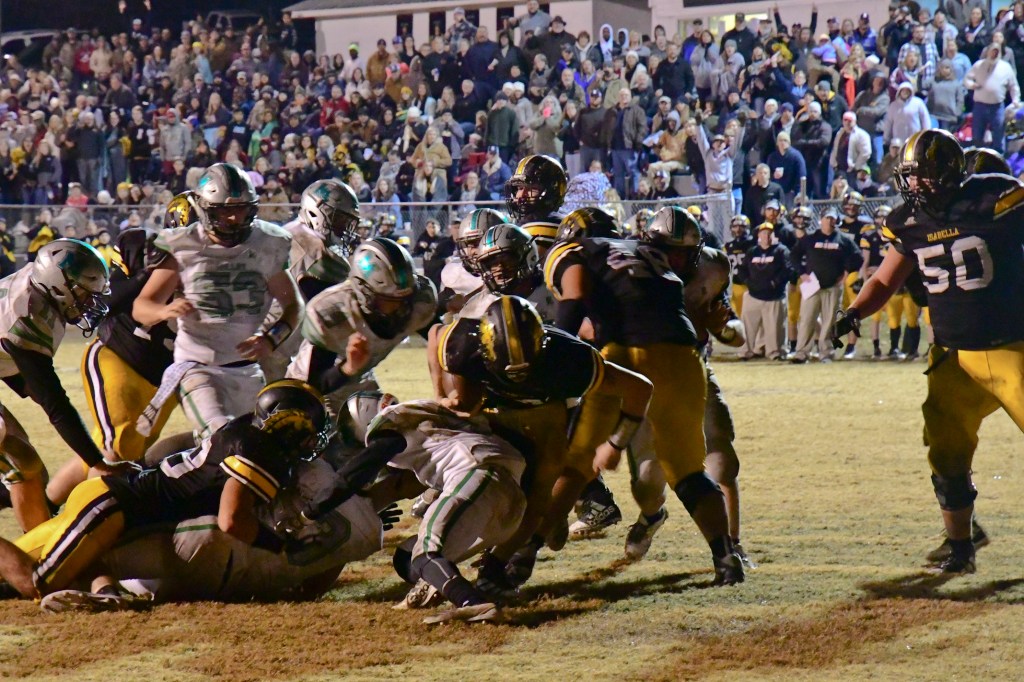 When Millry traveled to Isabella to play the Mustangs in the second round of the Class 1A state football playoffs, both sides knew they were on for a battle.

After all, the two programs had only one loss between them and a combined record of 21-1.

It took overtime and a goal-line stand on a 2-point conversion, but Isabella won the battle 29-27 to earn a spot in the third round.

“They are a very good team, obviously, but we knew that,” Isabella head coach Tate Leonard said. “Our plan worked. We wanted to keep the ball away from them. That’s what we did in the first half, and they didn’t even touch the ball in the third quarter. We didn’t give them the opportunity. We knew they would make some big plays, but we wanted to limit them. Defense wins championships, and that’s what happened.”

The teams traded interceptions in the first quarter. Austin Jones won Isabella the ball by hawking a pass just a minute into the contest, but Millry returned the favor five minutes later.

Momentum shifted Isabella’s way when the Mustangs’ defensive line deflected a Millry pass. The ball went straight up into the air before falling into the hands of Dalton Mims, who got the ball to the Wildcats’ 4-yard line.

Cole Atchison put Isabella on the board the next play by carrying the ball into the end zone, breaking the plane on the second effort.

Atchison carrying the ball would be a common sight in the contest. He had 38 rushes for 195 yards and three scores when all was said and done.

Millry got on the board late in the first quarter on a 15-yard touchdown pass, but the point after sailed wide left to keep Isabella on top 7-6.

The Mustangs gave up a turnover on downs at the Millry 14-yard line with 7:19 to go before halftime, and the Wildcats scored shortly thereafter with an 86-yard touchdown pass to go up 14-7.

Lance Price capped a long IHS drive with a 4-yard run for a score with less than a minute to go before halftime, but the PAT was missed leaving Millry up 14-13 at the break.

“That team averages 47 points a game,” Leonard said. “Our defense did amazing. Our coaches had a great plan. I’m proud of the whole program.”

The Mustangs received the kickoff to start the third quarter and managed to maintain possession and kill the clock for the entire third quarter.

However, that long drive ended on another turnover on downs for Isabella when a touch pass from Atchison sailed just out of the reach of Anthony Fjelstad in the corner of the end zone.

The momentum had shifted Millry’s way as the Wildcats drove past midfield maintaining a 1-point advantage early in the fourth quarter.

However, Millry went to run a quarterback sneak on a fourth and short. The QB went under center for the first time in the contest, and the snap sailed under his hands, perhaps due to the change in setup.

Reid Mitchell fell on the ball for IHS near midfield, and the Mustangs were in business.

Just over three minutes later Atchison carried the ball into the end zone from five yards out to put Isabella back on top 21-14 after the IHS QB ran in a 2-point conversion as well.

Things were far from over, though. The Wildcats tied the contest at 21-21 with a 20-yard touchdown pass with 3:37 left to play.

Neither team could get anything going on offense in the next possessions, so the game went to overtime, highly fitting for a battle of top teams in the postseason.

Each team gets four downs to score from the 10-yard line in overtime.

Isabella took three plays, but Atchison punched the ball in from five yards out.

The Mustangs decided to go for two, and Atchison managed to power across the goal line again to put Isabella up 29-21.

“It wasn’t (a hard decision) at all to go for two,” Leonard said. “My quarterback said he wanted the ball, so I gave it to him.”

Millry’s quarterback kept the ball and found the end zone on the Wildcats’ first offensive play, so everything came down to a 2-point conversion.

Millry’s QB kept again, but the Mustangs’ defense stood tall and brought him down a yard short of the goal line to earn the victory.

Isabella (12-0) will now travel to face undefeated Lanett in the third round.

“We have to do what we do,” Leonard said. “We are something special. We just have to have another good week. We are not satisfied. We have to stay humble and stay hungry. We’re taking things one round at a time.”