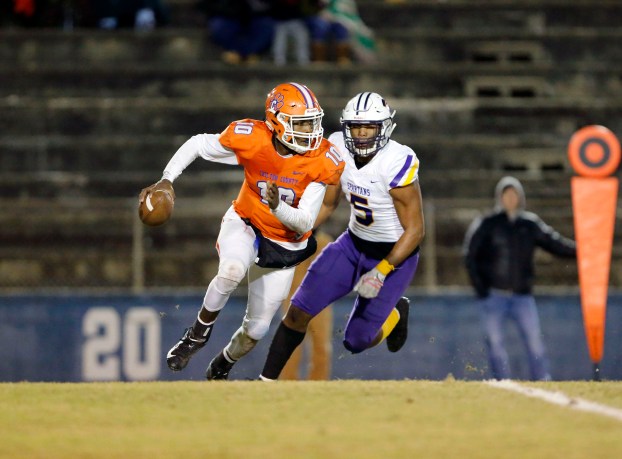 The 2019 Football season came to a disappointing end on Nov. 8 for the Chilton County Tigers, as they saw their season come to a close in the opening round of the AHSAA 5A state playoffs in a 28-0 loss at home to the Pleasant Grove Spartans.

Pleasant Grove wasted little time flexing their offensive muscle after a opening onside kick would be covered by the Spartans setting up the visiting offense at their own 46. Four plays later and Zyquez Perryman would connect with Tyler Christopher for a 9-yard touchdown that would put the Spartans up early 7-0.

A pair of three and out possessions by both squads would see Pleasant Grove start their second scoring possession of the evening at their own 30-yard line. A big first down run by Xavier Hill would move the Spartans out near midfield while a 21-yard connection from Perryman to Christian Lewis would set Pleasant Grove up first and ten inside the Tiger red zone. Two plays later and Hill would put the Spartans up 14-0 with 2:52 remaining in the first quarter.

The Tigers would see their first first down of the night come on their ensuing possession thanks to a 27-yard scamper by Shi Keem Laister, but with the drive would stall near midfield where Chilton County would be forced to call on the punt team once again.

The ensuing Pleasant Grove possession would start at their own 15-yard line where the Spartans would go to work. Two big first downs would move the visiting team out near midfield but a third and eight at the 40 would see a pass attempt by Perryman be picked off by Dalton Patterson while setting CCHS up first and 10 at their own 44-yard line.

A three and out by the Tigers would see CCHS forced to punt once again while setting up the Spartans first and 10 at their own 14-yard line. First down plays of 11 yards, 22-yards, and 49-yards would move the Spartans down inside the redzone once again where Perryman would again connect with Lewis for a touchdown that would make the score 21-0 at the half.

With neither team able to mount much offense through the third quarter of the contest, the game would move to the final quarter.

The Spartans would add one more touchdown on the night to bring the game to its final score of 28-0.

While the Tigers’ season comes to an end, the 6-6 finish and playoff berth are building blocks on the road to a successful football program.

“Each year we are building off of the last team. I think this group has done an outstanding job of leading us and carrying us in the right direction. I wish I had them better prepared then what we showed. I felt coming in that we had a good plan and I certainly feel like they deserve better. They are a great group of young men and I love each and every one of them. Even with a loss, it is a great day to be a Tiger.”

By J.R. TIDWELL / Editor Maplesville earned a spot in the second round of the Class 1A state playoffs with... read more