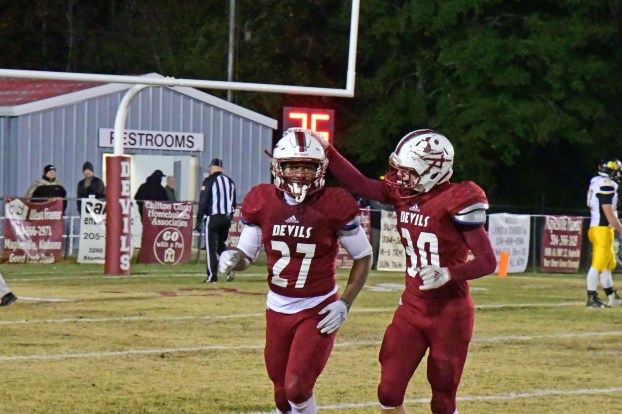 Teammate Brandon Pickle congratulates running back Ryan Morrow after one of his multiple touchdowns during the Red Devils’ game against Billingsley. (J.R. TIDWELL/ADVERTISER)

Maplesville earned a spot in the second round of the Class 1A state playoffs with a convincing 56-6 win over familiar foe Billingsley Nov. 8.

This was the 85th meeting of the two schools on the gridiron but first since 2015.

Things started out fairly even. Eli Cobern made an interception for Billingsley to end the opening Maplesville drive deep in Bears territory.

The Red Devils, not to be outdone, regained possession two minutes later when Latrell Wilson made a pick.

This time the Red Devils’ drive ended on an 84-yard touchdown run by Ryan Morrow to make it 6-0 MHS midway through the opening quarter.

“Ryan (Morrow) right now is 100%,” Maplesville head coach Brad Abbott said. “You can tell by the way he is running the ball. Our O-line the last three weeks we have been really implementing some things to correct stuff we thought they were doing they didn’t need to. Instead of pouting about it, they’ve come to work every day and accepted the coaching that has been put at them, and they are getting better. They want to get better, and that is being shown by the amount of rushing yards we have put up the last three weeks.”

The scoreline remained until the second quarter, when Morrow again found the end zone from six yards out.

Next was a 48-yard catch and score on a pass from Jackson Abbott to Kayln Hardy.

Billingsley fumbled on its next offensive play, and it was scooped up and run 21 yards for a touchdown by Morrow, who was doing work on both sides of the ball.

The Red Devils went into halftime up 28-0, and that margin grew to 49-0 MHS by the end of the third quarter.

Wilson made another interception just before halftime, and Morrow had touchdown runs of 32 and 45 yards combined with a 12-yard run for a score by Wilson to reach that 49-0 mark.

The final touchdown of the night for Maplesville came midway through the fourth quarter, when Brady Harrison fought his way into the end zone on a short run. Harrison made several runs on the drive to help propel MHS into the red zone before finally crossing the goal line.

Taylor Arington put the lone points of the game on the board for the Bears with 4:36 left to play with a rushing score.

The matchup once again marks a clash of storied 1A football powerhouses. The two last met in the first round last season, when Maplesville earned a 35-12 victory.

However, Sweet Water comes into the game this time with a better record.

“They have a lot of pride in their program down there, and we have a lot of pride in ours,” Brad Abbott said. “It’s going to be a great football game. I mean, it’s Maplesville-Sweet Water. It will be looked at all over the state. It’s a big second-round matchup. You’d think it would be in the semifinals or something like that. One good 1A football team will not be around for the third round, that’s what it’s all about.”

Brad Abbott told his players in a huddle after the game they had to be ready to work on Monday to get ready for the Bulldogs.