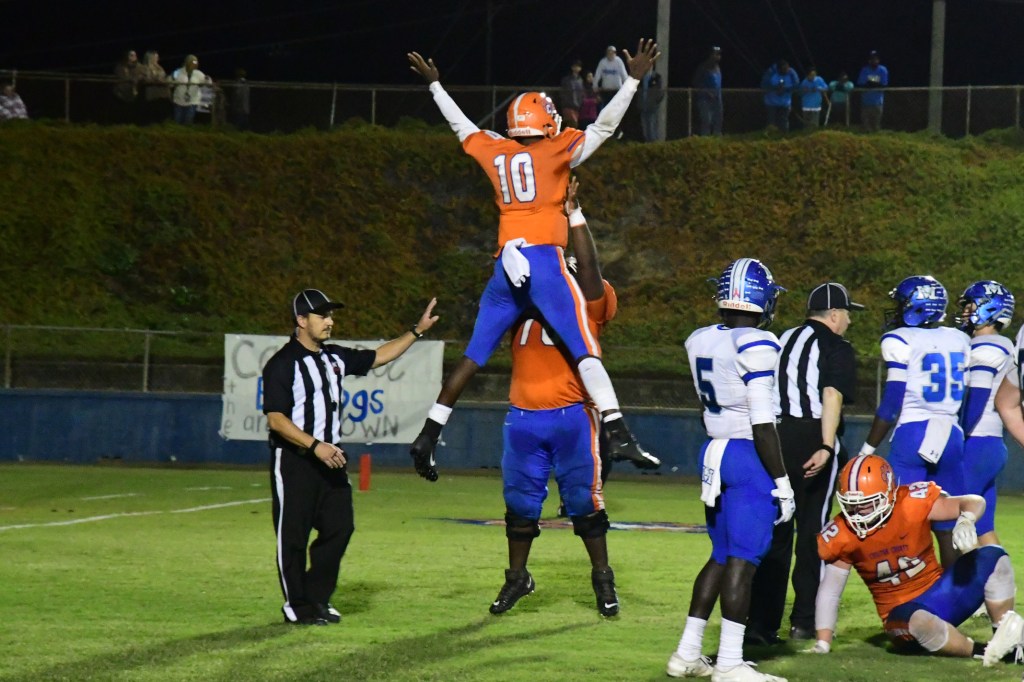 The Class 5A, Region 3 matchup between Chilton County and Marbury Oct. 18 was the textbook definition of a tale of two halves.

The Tigers found themselves down 21-7 at halftime, but a 21-point third quarter and 31 total unanswered second-half points turned things around and earned CCHS another region win on homecoming.

The Bulldogs took an early 14-0 lead after a 63-yard touchdown pass and a short run to cap a drive set up by a 46-yard throw and catch.

Devonte Robinson finally got the Tigers on the board late in the opening quarter by capping a drive with a 4-yard set up by a big fumble recovery on a botched punt attempt by the Bulldogs.

However, Marbury answered two minutes later with a 36-yard run for a score to take the aforementioned 21-7 advantage into halftime.

“(Marbury) wasn’t doing anything that we hadn’t seen,” Morrison said. “We just had to do our job. We didn’t need to get too crazy or emotional, we just needed to stay focused and continue to plug away. We finally did the things we were supposed to do, and we finished the game out.”

Things changed completely in the second half. The Tigers’ defense pitched a shutout for the rest of the contest, and the offense broke out a formation that is older than themselves and even their parents: the wishbone.

Chilton County began pounding the ball and chewing up yards while simultaneously wearing out the Bulldogs’ defense.

“We have done (the wishbone) pretty much every year I have been here,” Morrison said. “This year we haven’t brought it out in our games quite as much.”

Robinson pulled CCHS to with seven points of Marbury by breaking a 38-yard touchdown run early in the third quarter.

Chilton County ended the Bulldogs’ next drive by blocking a field goal and recovering the ball at the CCHS 34.

The Tigers drove the field and capped the drive with a short touchdown plunge from Shi Keem Laister to tie the game at 21-21 with 3:23 left in the quarter.

The Tigers’ defense forced a punt late in the third, but their offense was not done yet.

Laister carried the ball himself and found some room down the right side.

He stutter stepped, stuck his foot into the ground, cut back left and avoided the last two members of the Marbury secondary.

All that was left was to outpace everyone on the field and complete the 69-yard touchdown run that gave Chilton County its first lead of the contest at 28-21 with 17 seconds left in the third period.

The CCHS defense forced Marbury into another punting situation early in the fourth quarter, but the Bulldogs went for a fake.

The Bulldogs heaved the ball downfield, but Britten Worral intercepted the pass.

Laister again capped a drive with a short touchdown run to make it 35-21 Tigers with 5:41 left to play.

Brian Giacobbe hit a field goal to make it 38-21 with just over two minutes left, and Worral picked off Marbury again on the final play of the game to end the region victory.

Chilton County is now 4-4 overall and 4-1 in region play.

“This win puts us in third in the region,” Morrison said. “We go next week to Demopolis. A win at Demopolis would make us second in the region and let us host (in the first round of the playoffs). We still have things that can keep driving us along instead of sitting there and saying ‘hey, we’re in the playoffs.’”