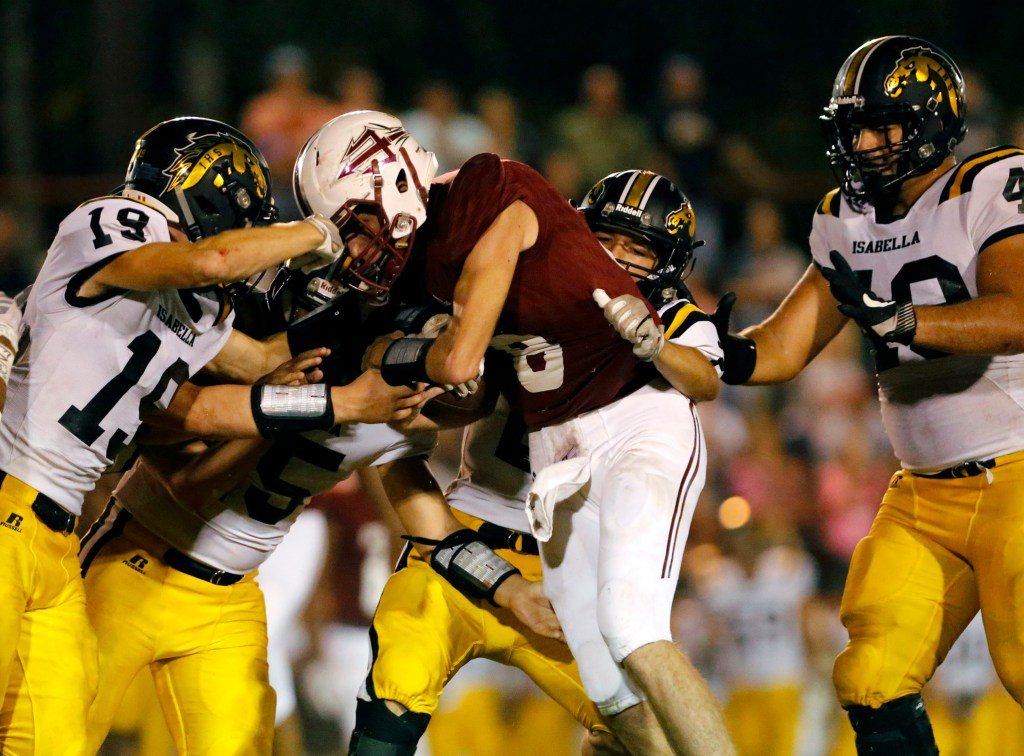 When Maplesville and Isabella meet on the gridiron, sparks fly. Add in the fact that the Red Devils and Mustangs were likely playing for the Class 1A, Region 3 title and a No. 1 seed going into the playoffs, and you only heap fuel on the fire.

People packed into Maplesville early Oct. 11 to get a seat for this year’s rivalry contest.

The crowd on both sides kept the noise going all night, and the excitement in the air was palpable when the two teams finally kicked off.

The Red Devils settled in for a long drive that took seven and a half minutes but answered with a score of its own on a 4-yard run by Ryan Morrow to knot the game.

MHS quarterback Jackson Abbott connected with Ajayla Robinson three times on third down to keep the drive going, and the Red Devils drew the Mustangs off for an offsides penalty to earn another first on third down.

Maplesville seemed to even things up after forcing a turnover on downs during the Mustangs ensuing drive, but the Red Devils failed to capitalize on the momentum.

MHS went three and out and were forced to punt.

Isabella returned the punt to the Red Devils 19-yard line to set up a score the next play.

The Mustangs turned up the heat by going for a surprise onside kick and winning possession.

The drive again was capped by an IHS score, and Maplesville was in a hole down 21-7.

“They were sharp on all three phases (of the game),” said Maplesville head coach Brad Abbott. “Their special teams were key (for them) tonight. They had a big punt return and got an onside kick, that’s 14 points. They never stopped on offense. Their offensive line is really good. They do a good job of using that to their advantage. They are great tacklers on defense. If you tackle well and block well on offense, you are going to be what they are, which is 7-0.”

The play of MHS quarterback Jackson Abbott was stellar throughout the contest.

Jackson Abbott had two bombs thrown on target to his receivers that both fell incomplete thanks to good coverage by the Isabella secondary.

Either play could have impacted the game.

“He did a good job tonight,” Brad Abbott said of his son Jackson. “He has been working with the receivers, and he has a lot of confidence in those guys. He knows he just needs to put it where they can get their hands on it.”

With 4:31 left before halftime Isabella blocked a punt and returned it to the 1-yard line, another miscue that cost Maplesville points.

However, Jackson Abbott connected with Latrell Wilson for a 54-yard touchdown pass to narrow the gap to 27-14 IHS.

The Mustangs again had a big play by returning the ensuing kickoff to the Red Devils’ 28-yard line, which Isabella again turned into points to make the halftime deficit 34-14 for MHS.

Maplesville never gave up and kept scrapping, though.

“That’s how Maplesville always is,” Brad Abbott said. “We play until the end, and they fight hard. Our kids are proud of that Maplesville uniform. They don’t want to let all the people that have been here down.”

Jackson Abbott connected with Kayln Hardy on a 50-yard bomb for a score and later found Caleb Hobbs open in the end zone while running for his life for a 14-yard touchdown pass.

He also found Wilson again on a 25-yard catch and score late in the fourth.

However, every time Maplesville put points on the board, Isabella answered to keep the game out of reach.

Morrow was held to 15 carries for 48 yards and a score. He played for the first time since leaving the Reeltown game with a lower leg injury two weeks ago and was held out to let him rest and recover.

Despite the loss, Brad Abbott remained optimistic for the rest of the season.

“We can still wrap up second in the region and get a home game (to start the playoffs,)” he said.

The Red Devils fall to 5-2 overall and 4-1 in region play. They have an open date next week before finishing the region slate with a home game against Francis Marion Oct. 24.