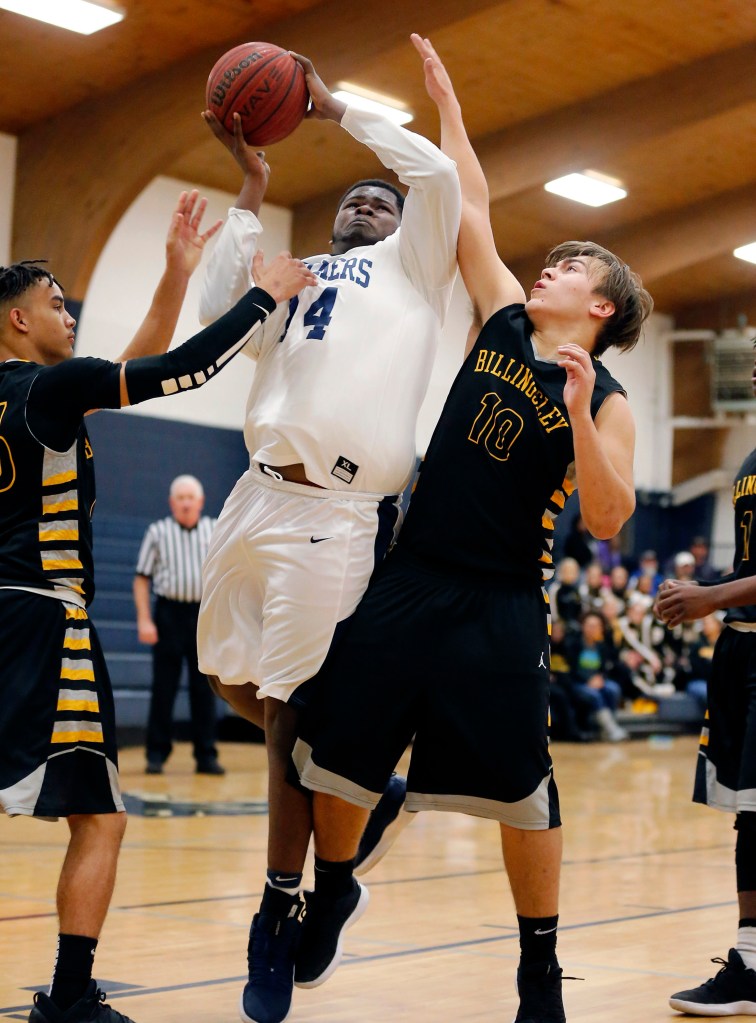 The Jemison Panthers picked up a pair of wins on Jan. 10 at the expense of the Billingsley Bears.

The Lady Panthers knocked off the Bears 47-28, while the Jemison varsity boys picked up a 46-32 victory.

The early moments of varsity girls action for the evening would see a closely contested matchup.

However, it would be Panthers point guard Ashlee Hilyer that would change the game during the early going.

With the scored tied at four apiece, a 3-pointer from Hilyer would make it a 3-point Jemison lead while her second would extend the lead to six. Two more from behind the arc, along with one from Haileigh Greer, would see the Panthers end the first with a 21-10 lead.

Preslee Pittman would cut the lead to nine for the Bears to start the second period but would be answered by a basket from Greer. Baskets from Brooke Smith and Taylor Lane would make it a 15-point Jemison lead, while two from Taylor Lane along with another trey from Hilyer would extend the Panther lead to 20.

A late free throw from Greer and a basket from Breagan Franklin would send Jemison to the halftime break sporting a 33-14 lead.

Five points from Hollann Horton would be all the points the Bears would muster during the third period, as Greer would lead the way for the Panthers with eight points during the quarter to lead Jemison to a 43-19 lead at the end of three.

Horton would again get the Bears started in the fourth but would be answered with a basket from Greer. A 3-pointer from Greer would extend the Jemison lead to 25 while a pair of baskets from the Bears would cut the lead back to 21 as the Panthers cruised to a 47-28 win over Billingsley.

Horton led the Bears with nine points and 11 rebounds.

Varsity boys action would get off to a slow start, as a 3-2 Panther lead would remain intact till the 2:57 mark of the first period when a pair of free throws from Brisen Tatum gave Billingsley its first lead of the game.

The Bears’ lead would be short lived, however, as a basket from JaRay Smitherman would kick off a 13-0 Panther run that would give Jemison a 16-4 lead at the end of the first.

The Panther run would continue into the second period behind a basket from Nathan Johns.

The run would extend to 23-0 before a basket from Raymond Cutler would bring it to an end with the Panthers leading 25-6.

The Panthers would extend their lead to as many as 22 before the Bears would begin to chip away.

A free throw from Carlton McCary, along with a basket from Cutler, led a 7-0 Billingsley run to end the period, but it would be the Panthers that would take a 28-15 advantage to the break.

The Billingsley defense would be responsible for getting the Bears back in the game during the third, as the Bears held the Panthers to just four points during the period.

On the offensive side of the ball the Bears would rely on Cutler, who would start the period by dropping seven consecutive points for Billingsley. A trey from Robert Glass would cut the lead to five while a late free throw from Johns would make the Jemison lead six at 32-26 to end the third.

Cutler and Smitherman would exchange baskets to start the final period to keep the lead at six, while a basket from Jarred Taylor would extend the Jemison lead to eight.

A free throw from Cutler would cut the lead to six, while a pair of free throws from Johns would make it a 9-point Jemison lead.

A free throw from Heath Edge along with a pair of baskets from Johns and Devan Moore would extend the lead to 12 as the Panthers would go on to a 46-32 win over the Bears.

Johns led the Panthers with 19 points and 12 rebounds, while Cutler led the Bears with 15 points and six rebounds.