Maplesville takes down defending 2A champ Lanett; will face Linden in semifinal rematch 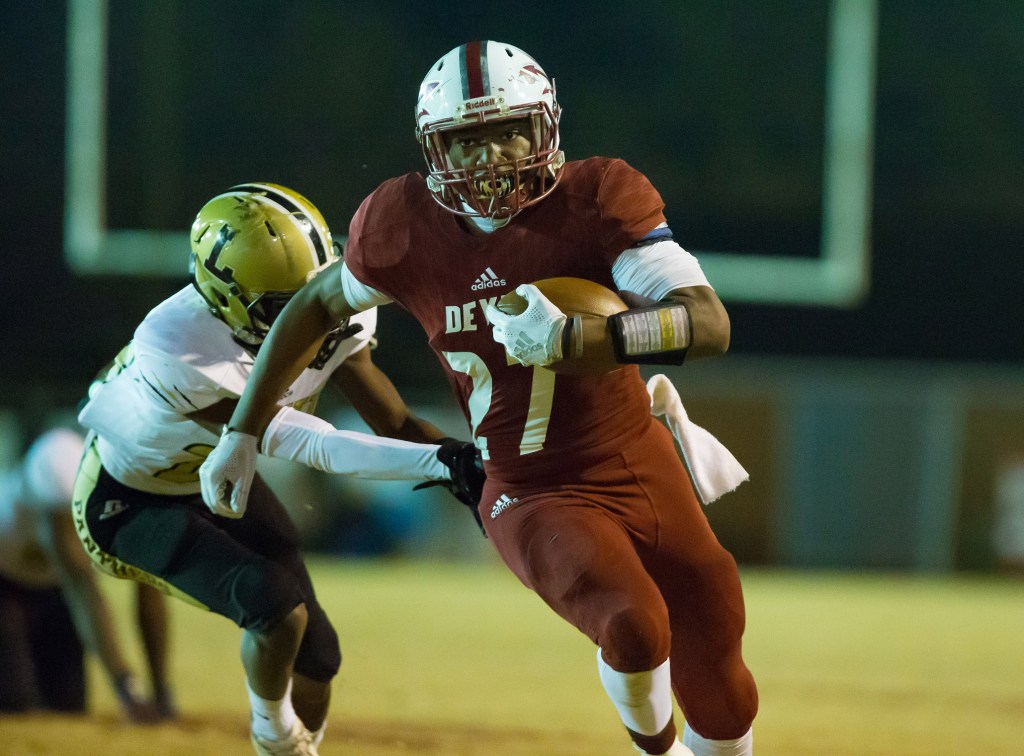 Ryan Morrow fights through the tackle attempt of a Lanett defender. (BRANDON SUMRALL/SPECIAL)

The Maplesville Red Devils are no strangers to facing some of the best competition the state has to offer when it comes to the playoffs.

MHS defeated defending Class 1A champ Sweet Water 35-12 in the opening round of the postseason.

The third round saw the Red Devils host defending 2A champion Lanett.

LHS dropped down to 1A in the latest AHSAA reclassification, and the Panthers were ranked No. 1 in the class in the final Alabama Sportswriters Association poll of 2018.

Now, thanks to Maplesville, Lanett’s first-ever season as a 1A school ends in the state quarterfinals.

The Red Devils took a 7-0 lead into halftime and never trailed before taking down the Panthers 29-6.

“We prepared (for this game) the same way we always do,” said Maplesville head coach Brent Hubbert. “Our kids are disciplined. They come in and work Monday through Thursday and get ready to play on Friday night.”

Maplesville won the coin toss and elected to receive. The Red Devils took the ball to the Panthers’ 11-yard line, but the drive stalled due to a couple of penalties and Lanett forced a turnover on downs.

The Panthers drove to the Red Devils 5-yard line, but Maplesville stuffed Lanett on fourth and 2 to forced a T.O.D. of its own.

The first quarter ended at a 0-0 stalemate, and both teams traded possessions until midway through the second quarter.

Lanett went to punt on a fourth and 25 but was awarded a first down due to a roughing the kicker penalty. The Red Devil defense stood tall again and forced another punt.

Maplesville ended its ensuing drive with a short 1-yard touchdown plunge by Christin Brown to go up 7-0. This scoreline remained until early in the fourth quarter.

“The defense the last couple of weeks has stepped up,” Hubbert said. “They played with a lot of heart and guts. They were resilient.”

The precipitation forecast for the area held off until the fourth quarter. The rain seemed to invigorate both offenses.

Ryan Morrow fought through defenders to cap a MHS drive with a 23-yard touchdown run with 9:50 remaining to play. The point after put Maplesville up 14-0.

This time Lanett answered quickly, ending a drive with a 20-yard touchdown pass that narrowed the gap to 14-6.

Three minutes later Brown found the end zone again, this time from 2 yards out, to make it 21-6 MHS.

A holding call in the end zone on Lanett gave the Red Devils two more points on a safety, and another run and score by Morrow was the final nail in the coffin.

“We have to give credit to our offensive line and (quarterback) Jackson Abbot,” Hubbert said. “When we needed a little pass, he threw completions and our receivers stepped up and made catches. We got big plays out of them.”

With the victory, Maplesville earns a spot in the state semifinals and a rematch against region foe Linden on Nov. 30. Linden will once again host the matchup.

“We have to come to work Monday,” Hubbert said.

The winner of that contest will play the winner of Mars Hill/Pickens County in the 1A state championship on Dec. 6.