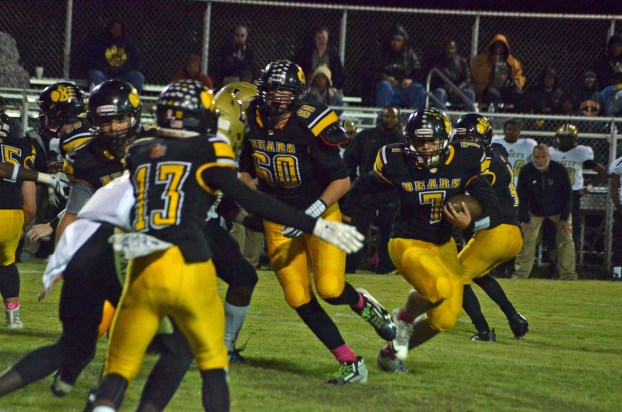 Billingsley’s Taylor Arrington makes a carry around the left side. (J.R. TIDWELL/ADVERTISER)

Head coach Marvin Morton and the Billingsley Bears knew going into their Oct. 26 matchup with the Lanett Panthers that the game would prove to be a tough one.

The Bears fought hard for four quarters, but in the end the Panthers picked up a 42-0 region victory and showed why they are ranked No. 1 in the Alabama Sports Writers Association poll for Class 1A.

“We came out and competed,” Morton said. “I was very proud of that. We weren’t intimidated. We gave it everything we had. We have to look on film and see what we can build off of.”

Billingsley received the opening kickoff but lost the ball a few plays into its opening drive due to an interception.

However, Walker Motley made an interception on the next play to give the Bears possession once again.

The Bears had a few big plays in the contest but failed to find the end zone, thanks in part to two separate drives that stalled in the red zone and ended in turnovers on downs.

The Billingsley defense fought hard and gave up only seven points in the opening quarter, but by halftime Lanett had increased its lead to 28-0.

By the end of the third quarter the Panthers were up 42-0, and the closing period would see neither team put points on the board.

The Bears (5-4, 4-2 Class 1A, Region 4) will now have a short week before traveling to face the 8-1 Thorsby Rebels for the final contest of the regular season for both schools on Nov. 1.

Verbena falls to Loachapoka on homecoming

By Brandon Sumrall / Special to the Advertiser A homecoming loss is not the goal of any football team, but... read more