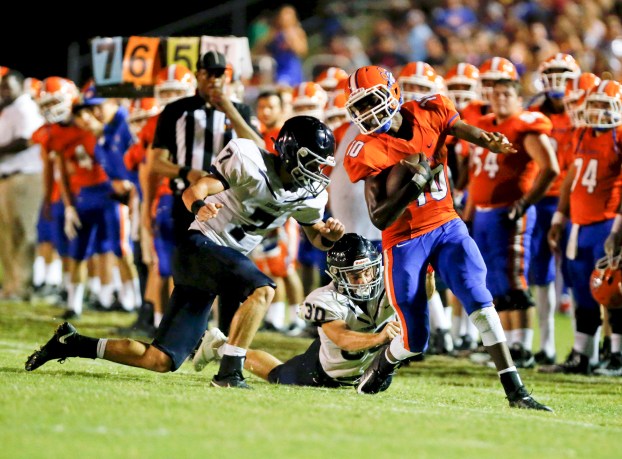 ShiKeem Laister runs down the sideline against Jemison on Sept. 21. (BRANDON SUMRALL/SPECIAL)

“The whole school had a bad taste in their mouth after going up to their place last year and losing the way we did 21-20. We really had a mark on this game all year,” said head coach Tal Morrison. “We knew coming in that they had an 0-4 record, but with a rivalry like this, we knew that we were going to get their absolute best.”

The Panthers best is just what the Tigers got, as Jemison wasted little time putting the contest’s first points on the board with their opening drive. A pair of long first down runs by Noah Gilliland and Adrian Jackson would move the Panthers out near midfield, where another run of 16-yards would move Jemison down to the Chilton County 27. One play later and Kevin Martin would find a wide-open Hunter Lowery for a 27-yard touchdown that would put Jemison up 7-0.

A pair of scoreless possessions by both teams would come and go before the Tigers would see their first scoring possession of the night.

Chilton would take over at the Jemison 45. Runs by Devonte Robinson and Cameron Wright would carry the Tigers down inside the red zone, where Triston Schmidthorst would punch it in from 12 yards out. The two-point conversion would come up a yard short and leave the Tigers trailing 7-6 at the half.

The opening possession of the second half for Jemison would see the first turnover of the game, as Panther quarterback Daniel Martin would be picked off by Chilton’s Dalton Patterson.

Patterson would return the interception for a touchdown, but with the Tigers being hit with a personal foul penalty the points would be removed and Chilton would take over at the Jemison 10.

With the Tigers unable to capitalize on the good field position, a fourth and goal at their own 18-yard line would see Chilton call on Walker Green to attempt a 35-yard field goal.

Green drilled it right down the middle, and the Tigers would take a 9-7 lead midway through the third quarter.

Another round of scoreless possessions by both teams would see the Tigers expand on their lead after a 57-yard scoring drive that would be capped off by a 38-yard touchdown run by Robinson that would make it a 16-7 lead for the Tigers with 10:36 to play.

The Chilton lead would be short lived however, as the Panthers put together a scoring drive of their own starting at their own 33. With Patrick Pickett, Gilliland and Jackson toting the mail for the Panthers, Jahvonn Smith would cap the drive with a 32-yard touchdown carry that would pull the Panthers to within two at 16-14 with 7:28 remaining.

Chilton’s ensuing possession would start at their own 35, where Wright and Robinson would go to work on the ground for the Tigers. Runs of 9, 17, and 10 would move Chilton out across midfield where Schmidthorst would make it a trio in the backfield and drive the Tigers down inside the red zone.

With Chilton facing a first and goal at the Jemison 4, Schmidthorst would cap the drive with a 4-yard touchdown carry that would make it a 23-14 Tiger lead with 3:33 to play.

Jemison would get one last shot at the Tigers and would set up for their next possession at their own 35. A pass interference call against the Tigers would move the Panthers out to midfield, where Jackson would break loose for 21 yards to move Jemison down to the Chilton 31.

A run of 5 by Jackson and a pass from Martin to Lowery for 5 more would make it first and 10 for the Panthers at the Chilton 21. With the Panthers unable to advance against the Tiger defense, a fourth and 14 at the 25 would see Schmidthorst come up with a sack that would turn the ball over on downs.

Two plays and a victory formation by the Tigers would seal a 23-14 homecoming victory over the Panthers.

“I take my hat of to Coach Clements, his staff and their entire team. They played a heck of a ballgame. They give us more than we wanted. I know their record doesn’t show it, but they are a great team,” said Morrison. “I am very excited for this town, for our community, our school and this team.”

Wright led the Tigers with 79 yards on 15 carries with a touchdown, while Jackson led the Panthers with 67 yards on 10 carries.

By J.R. Tidwell / Editor A week after falling to region foe Linden on the road, the Maplesville Red Devils... read more