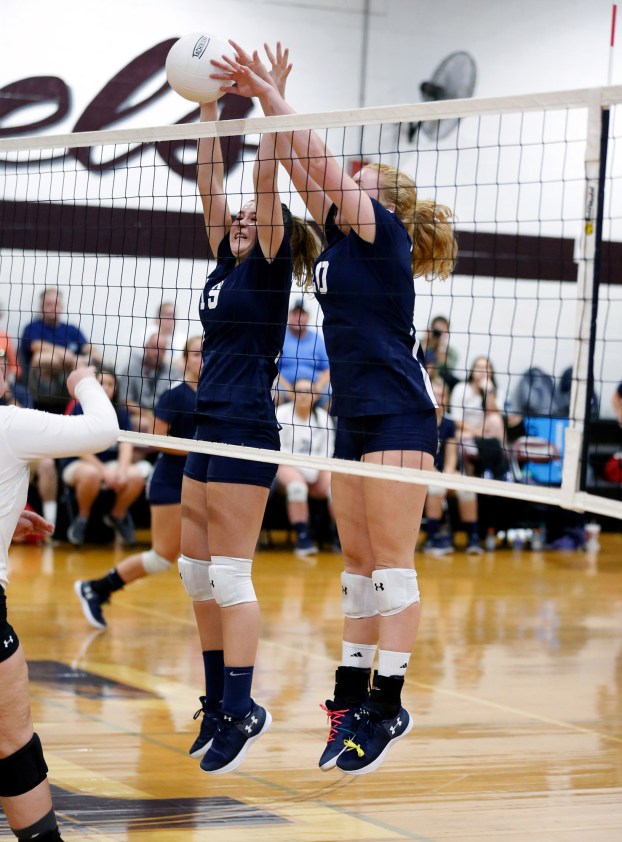 Jemison's Kyla Wilson and Caroline Foote team up for a block. (BRANDON SUMRALL/SPECIAL)

The two teams would battle through a four-all tie before the Panthers would pull ahead by four early in the set. The big break for Jemison would come as Kinsley Davison took over serving duties for the Panthers and would lead a 7-0 Jemison run thanks in no small part to her five aces.

The Rebels would finally break the serve while making the score 16-8 in favor of the visitors, but with Jemison gaining serving duties right back, Logan Woodley would lead a 8-0 Panther run that would give Jemison a 25-8 first set win.

Set two would be all Panthers from the get go, as Jemison would take over serving duties with a one-all tie and go on a 17-0 run behind the serving of Woodley.

With a 17-2 lead before the Rebels would manage to break the serve, the Panthers would cruise through set two to a 25-8 win.

The Panthers looked poised for another quick outing to start the third set thanks to a 4-0 run behind Woodley to start the set, but the Rebels would battle back to take an 8-6 lead behind the serving of Abigail Baker.

The lead would be short lived, however, as the Panthers would answer with a four-point run of their own behind the serving of Breagan Franklin.

Davison would build on the Jemison lead thanks to six aces that put the Panthers way out in front 18-8, while another late run led by Woodley would give Jemison a 25-13 set win and a three-sets-to-none match win over the Rebels.

“I am very pleased with the way the team stayed together and that they didn’t quit even when we were so far ahead,” said Jemison head coach Stephanie Bolling. “It is easy for a team to back off and get complacent or feel comfortable while thinking that they don’t have to be ready to play. We got caught on a couple plays not knowing where the ball was and not moving our feet but I think they recovered really well. I was proud of them for that.”