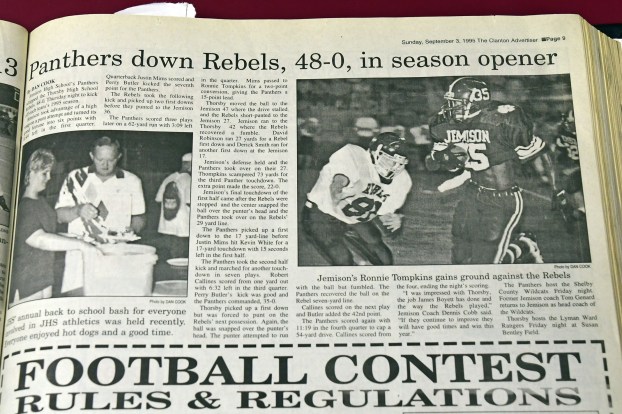 Here is the article that ran in The Clanton Advertiser after the last football game between Jemison and Thorsby all the way back in 1995. The Panthers defeated the Rebels 48-0. (J.R. TIDWELL/ADVERTISER)

A look back at the Jemison-Thorsby football rivalry

Anyone in Chilton County hearing a low rumble and feeling electricity in the air coming from the north today (Aug. 23) need not worry.

That is simply the buzz surrounding the first meeting in 23 years between the Jemison Panthers and Thorsby Rebels on the gridiron later tonight for the first time since 1995. The game will be at Thorsby with a 7 p.m. kickoff.

Not only does Jemison enjoy a 14-1 record all-time against its next-door neighbor, but the Panthers have shut out the Rebels the last six times the two have faced each other in football.

Thorsby has not scored a single point against Jemison since 1976. The Panthers won that contest 47-12.

In fact, half of Jemison’s victories over Thorsby have been shutouts. The Panthers have outscored the Rebels in these 15 games 536-111.

The last and only time Thorsby has topped Jemison in football was 28-14 on Oct. 23, 1970. The Rebels went 8-2 that season under first-year head coach Alton Culp. THS lost to Ranburne 34-14 in the first round of the AHSAA state playoffs that year.

However, games played over two decades ago or more have little to no bearing on tonight’s highly anticipated matchup.

Class 2A Thorsby went 8-3 last year and made it to the second round of the state playoffs before falling to Goshen 42-8.

Two keys to watch in the game will be how Jemison fares without workhorse running back Eric Evans, who graduated last school year, and how senior Thorsby quarterback Christian Fortner does against the defense of a larger school.

Nothing will be certain until the final whistle blows at the end of the contest, but the excitement surrounding the game is substantial.