Rebels advance to second round 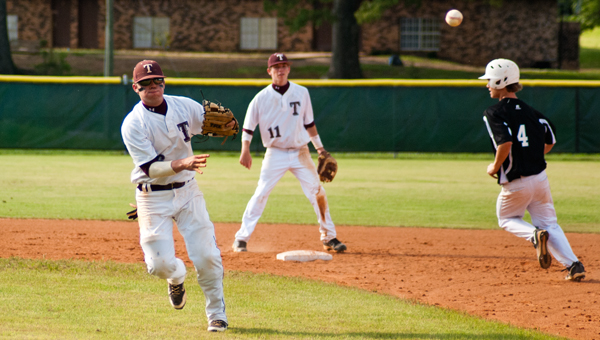 Thorsby second baseman J.R. Posey throws to first base for an out during the Rebels' win over Horseshoe Bend on Friday.

The Thorsby Rebels defeated Horseshoe Bend twice on Friday to advance to the second round of the Class 2A state baseball playoffs.

Bo Hoffman picked up the win on the mound in the first game, as Thorsby won 7-5. Hoffman pitched 6 1/3 innings. Jason Price came in to pick up the save despite the bases being loaded with one out in the seventh inning.

Price would drive in the first run of the high scoring second game, after Matt Morgan advanced to second with a stolen base and subsequently scored off a Price single.

J.R. Posey would later drive in the second run of the inning to put the Rebels up 2-0 heading into the bottom half of the first inning.

The Generals scored four of their six runs in the bottom half of the first.

The score was 4-2 heading into the fourth inning. The Rebels’ bats came alive in the fourth as they scored 12 runs.

Morgan drove in the first three runs of the inning when he hit a home run that sailed over the left field fence. Senior Jace Maddox would step up to the plate later in the inning with the bases loaded and two outs. After three pitches brought the count to 2-1, Maddox found a pitch he liked and drove it over the fence for a grand slam.

A diving catch in centerfield by senior Stephen Mims kept the Generals from scoring multiple runs to begin the bottom of the fourth inning. The Generals were able to score two runs in the inning but another successful relief appearance by Price and a running catch by Price’s fellow classmate Maddox in right field stopped the bleeding.

The Rebels’ led 14-6 heading into the fifth inning. They were able to score two more runs to put them ahead by 10 in the last two innings of the game. Price was able to keep anyone from scoring in his last inning of work, which allowed the 10-run rule to come into play at the end of the sixth inning.

The Rebels (20-9) will host Reeltown (16-10), who defeated Billingsley Friday, in a best-of-three series beginning on April 27.