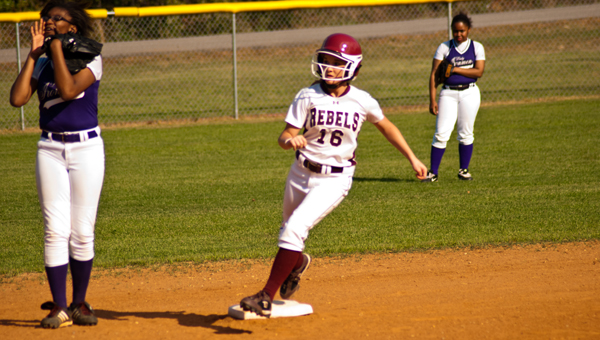 Taking the turn: Thorsby leadoff batter Ashlyn Chancellor rounds second base and heads for third during Tuesday’s game against visiting Holt. The Rebels won, 15-0, in four innings. Chancellor contributed with one double in three at-bats to go along with one run scored and one run batted in.

Thorsby’s softball team now has a winning record for the season.

The Rebels improved to 4-3 with Tuesday’s 15-0, four-inning win over Holt.

Josie Adams, meanwhile, pitched a no-hitter. She allowed only one batter to reach base, with a walk in the top of the second inning.

Katie Atkins had a hit in each of her three at-bats, with one run scored and three runs batted in.