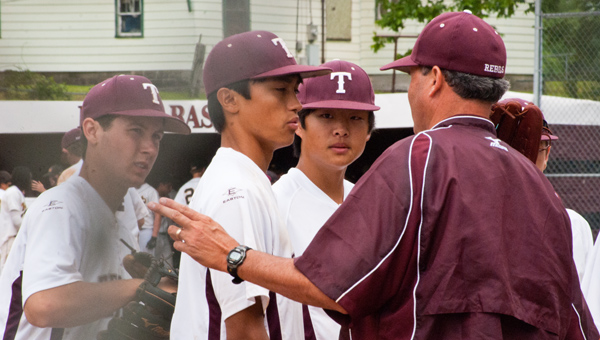 Giving pointers: Thorsby baseball coach Ab Argent, right, talks to players before they take the field to start an inning during Friday’s semifinal playoff round action against Leroy.

Thorsby’s first appearance in the semifinal round of the state baseball playoffs produced a heartbreaker and a cliffhanger.

The Rebels fought back from deficits of 11-0 and 14-2 in Game 1 to tie the score at 14 in the bottom of the sixth inning, but a three-run home run in the eighth inning by Leroy’s Justin Besteda gave the visitors a 19-14 win.

Leroy led Game 2, 6-3, in the bottom of the third inning, when play was suspended because of lightning and darkness.

The teams will pick up where they left off at noon Saturday.

THS must come back in order to avoid elimination in the best-of-three series, but they set a precedent in the first game of the day.

The Rebels trailed 5-0 after one inning and 11-0 after two and a half innings—with ace Cody Carroll on the mound and with the Bears opting not to start their best pitcher, Carlos Delgado.

But Stephen Mims led off the bottom of the third inning with a walk, and Parker Bryan and Matt Morgan both wound up scoring.

Brantly Maddox came in to pitch the fourth inning and held the visitors to three runs in the next four innings, allowing his teammates a chance to get back in the game by scoring seven runs in the fifth inning—on nothing but singles and walks—and four more runs in the sixth to tie the game at 14.

With one out in the top of the seventh inning and runners on first and second, THS third baseman Blake Elkins snagged a hard hit ground ball off the bat of Christian Snow, stepped on his base and fired across the diamond to first in time for an inning ending double play.

But the Rebels went 1-2-3 in the bottom of the seventh, and their golden opportunity was gone.

Chris Ervin and A.J. Portis singled off Maddox in the bottom of the eighth before Besteda hit one over the fence in left-center field.

The Bears tacked on another run before Thorsby could retire the side.

A lack of control plagued Thorsby pitching in Game 2, as Leroy built a 6-1 lead by taking six walks in the first inning and scoring on three wild pitches.

Thorsby’s first run was scored by Morgan, and the Rebels cut into the lead in the top of the third inning.

Mims led off the half-inning and was hit by a pitch, and Parker Bryan followed with a single, allowing Mims to score from second base.

Bryan scored on a sacrifice fly off the bat of Morgan.

Thorsby hosts Class 2A No. 1 Leroy on Friday in the semifinal round of the state baseball playoffs. To get... read more