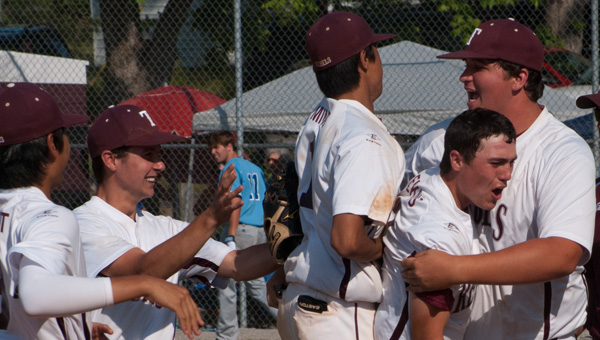 Thorsby baseball players celebrate after defeating Houston Academy for the second time Saturday, earning a berth in the semifinal round of the state playoffs.

Thorsby scored a combined seven runs in the final inning of both its games Saturday to advance to the semifinals of the Class 2A state baseball playoffs for the first time in school history.

Saturday’s action delighted what has become a baseball community and satisfied a group of players and coaches who have been close to this plateau—most of this year’s team was around for last year’s best-of-three series loss at Lexington, where THS won one game but lost two by a combined three runs.

“It felt good getting the monkey off our back,” said Thorsby coach Ab Argent, who has led the Rebels to the quarterfinals four times in his seven seasons.

Thorsby will host Class 2A No. 1 Leroy—last year’s state runner up—in a best-of-three series for the right play for the state championship. A doubleheader will be played at 1 p.m. and 3:30 p.m. Friday, and a third game would be played if necessary at noon on Saturday.

“They’re as good as advertised,” Argent said about the Bears.

But the Rebels haven’t lost a game at home since March 20, 2010, and gained much confidence with their performance in the quarterfinal round.

“I thought the difference [in the series win over Houston Academy] was our home field advantage,” Argent said. “We look for more of that this weekend obviously.”

Thorsby also needed a deep pitching staff and timely hits to knock the Raiders out of the playoffs.

Left-handed pitcher Stephen Mims started the first game of the series for the hosts and turned in a solid performance: three runs on four hits and four walks allowed in five innings pitched while striking out eight.

Carroll took over on the mound with a 6-3 lead in the sixth inning but wasn’t helped by his defense, as two errors in the top of the seventh helped Houston Academy take a 7-6 lead.

Jace Maddox led off the bottom half of the inning with a single, and Jason Price followed with another single.

Brantley Maddox came in to run for Price in what may have been the best decision of the game.

With runners on first and second, Blake Elkins ripped a single through the left side of the infield. The ball got past the leftfielder, allowing Jace Maddox to score easily and Brantley Maddox to slide in under a tag for the winning run.

Price and Elkins both went 3-for-4 in the game, and Wesley Smitherman went 3-for-3.

Bennett, who will play college baseball at Troy, was walked or pitched around every plate appearance.

“Our whole game plan was to not let him beat us,” Argent said.

The Thorsby coach again opted to hold out his ace, starting Shane Beam in Game 2.

Beam was effective for four innings before giving way to Price, who allowed only two hits in two innings. But one of those was a game-tying grand slam off the bat of Houston Academy’s Cameron Choquette.

Matt Morgan pitched a scoreless seventh and became the winning pitcher as the Rebels—playing as the visiting team—scored five runs in the top of the eighth.

Elkins, Smitherman, Andrew Farris, Stuart Scott and Mims all crossed the plate in the inning, capped by a two-run single off the bat of Morgan.

Carroll worked the bottom of the eighth and struck out the last batter he faced to begin the celebration.