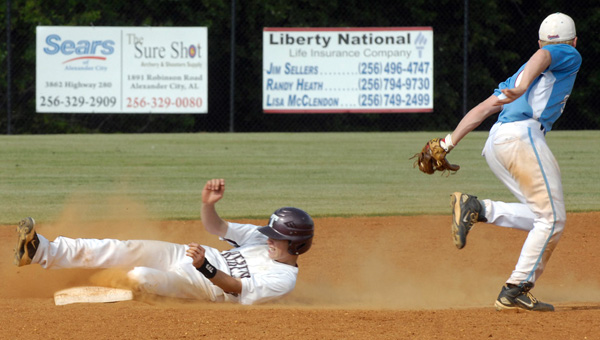 Feet first: Thorsby’s Parker Bryan slides safely into second base during a game at Horseshoe Bend on Monday.

The Horseshoe Bend and Thorsby second round playoff baseball match-up came down to the wire Monday night in Horseshoe Bend, as the visiting Rebels split, winning Game 1, 3-1, but falling in Game 2, 6-5.

THS starter Cody Carroll went the complete game for the Rebels in Game 1, giving up only four hits on 10 strikeouts while only walking three.

The score was tied 0-0 headed into the bottom of the second inning before Mathew Dean grounded into a double play that brought in the first run of the game, giving HBHS a 1-0 lead.

The score stayed at 1-0 until the top of the sixth, when Thorsby’s Matt Morgan and Blake Elkins both drove in runs off HBHS starter Corey Pouncey to give the Rebels their first lead late in the game at 2-1.

Pouncey went the complete game for the Generals, allowing six hits to go along with four strikeouts.

THS then added one more insurance run in the top of the seventh inning.

HBHS continued to struggle offensively through game two as Thorsby’s Bo Huffman went six innings on the mound, giving up only two hits on five strikeouts.

Unlike Game 1, the Rebels began Game 2 on top when catcher Matthew Morgan drove a solo home run off HBHS starter Jake Mitchell over the left field fence in the bottom of the third inning.

Thorsby added another run in the bottom of the fifth inning behind an RBI from Jace Maddox to take the score to 2-0.

The HBHS bats finally woke up in the top of the seventh inning, when Sandro Cruz beat out a ball hit to shortstop to get the inning going.

Mitchell then helped his own cause by driving in Cruz from first base with a triple to the right field gap to make the score 2-1.

Thorsby called on relief pitcher Shane Beam to slow the Generals’ bats, but it was to no avail as Horseshoe Bend took a 6-2 lead in the inning.

Thorsby wouldn’t go away quietly in the bottom of the seventh as Jason Price was able to drive in two runs for the Rebels to take the score to 6-4.

The Rebels were then able to add one more run before Mitchell struck out the final Thorsby batter to end the game.

The teams will play a decisive Game 3 at 3 p.m. Tuesday.

The road to the second round of the state baseball playoffs has been bumpy for Chilton County. There have been... read more