Rebels wrap up season with win 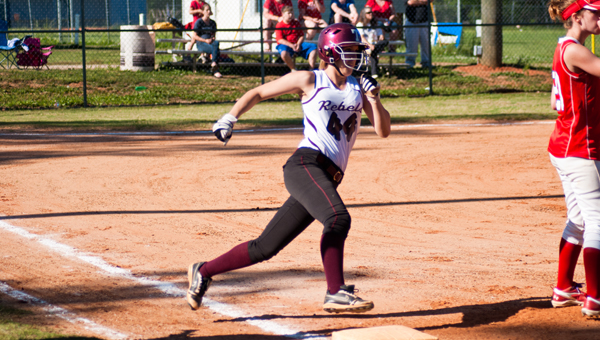 Around the bases: Thorsby’s Josie Adams rounds first base during Thursday’s game after she hit a ball to the outfield fence. Adams pulled into second for one of her two doubles on the day.

Thorsby ended its regular season—and gained momentum for its area tournament—with a 10-5 win at Verbena on Thursday.

The visiting Rebels scored two runs in the top of the first inning as Taylor McManus led off with a single, and Emily Spain followed with a double.

Halie McKinnon brought McManus home with an out, and Josie Adams came through with a two-out single to score Spain.

It was a sign of things to come for Adams, who went 3-for-3 on the day with a walk, two doubles, two runs batted in and a run scored.

Host Verbena responded with one run in the bottom half of the inning when Mattie Cleckler led off with a triple and scored on an out.

It was also a sign of things to come for Cleckler, who went 4-for-4 with a run and an RBI.

Thorsby pushed another run across the plate in the fourth inning—when Keela Lucas reached base on an error and scored on an out—but the fifth inning was particularly harmful to the Red Devils as THS scored three runs on three hits and four errors.

The visitors stretched their lead to 7-1 in the sixth when Christian Niece reached base on an infield hit and scored on an Adams double.

But VHS clawed their way back into the game in the bottom of the sixth, as the first two batters of the inning reached base via Thorsby errors. After an RBI single, two more Devils took walks.

Cleckler beat out a throw to bring home her team’s fourth run of the inning, but Thorsby escaped the jam when Spain, the catcher, corralled a wild pitch and tagged a runner sliding into home for the third out.

The Rebels put the game away in the top of the seventh, as Savannah Bice, McManus and Spain recorded consecutive singles, and all three scored.

McManus was the winning pitcher; Ashlie Shiers started in the circle for Verbena.