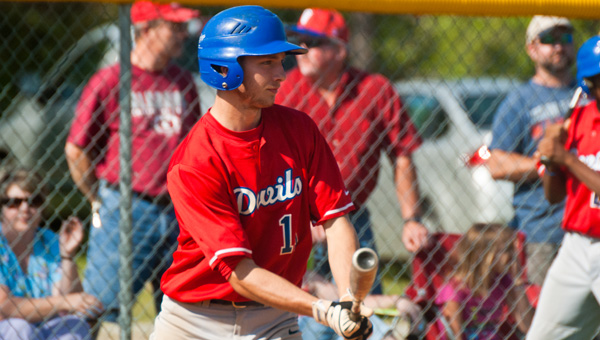 Getting loose: Verbena catcher Bay Lucas takes a practice cut before an at-bat against Autaugaville.

Verbena on Thursday clinched a spot in the state baseball playoffs with a 19-0 win over region foe Autaugaville.

The Red Devils will visit Loachapoka next Friday and, if necessary, Saturday.

Every VHS starter reached base safely on Thursday, and Christian Coston pitched a perfect game, allowing no hits or walks in five innings (the Devils did allow two baserunners on errors).

Kelly Dorsett led the way at the plate with three hits—one of which was a triple—in five at-bats to go along with one run scored.

Jeremy Creger went 2-for-2 with a double, two walks and two runs scored.

Jaryus Wilson went 2-for-4 with a double and a run scored.

Garrett Dennis had a hit, a walk, a sacrifice fly and three runs scored.

Phillip Hensley had a hit, a walk and two runs scored.