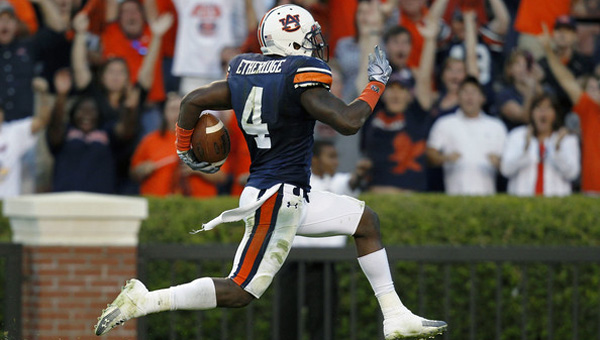 Senior safety Zac Etheridge overcame a neck injury to tie for the team lead in interceptions as Auburn won the 2010 national championship.

If Zac Etheridge inspires the Chilton Auburn Club as he did the 2010 Tigers football team, this year’s Unsung Hero Banquet could be the best in the event’s long history.

Etheridge, who overcame a terrifying neck injury to help lead Auburn to a national championship, was chosen as the 45th Unsung Hero and will be recognized at a banquet at 6:30 p.m. on April 19 at the Jemison Municipal Complex.

Etheridge cracked vertebrae and tore ligaments in his neck during a win over Ole Miss on Oct. 31, 2009, as he collided with a teammate while trying to make a tackle.

The safety, a native of Troy, lay motionless on the turf while medical crews rushed to his side and then transported him to a hospital.

Etheridge missed the rest of the season as he underwent surgery and strenuous rehabilitation, but he returned for the 2010 season, playing in all 14 games as a regular starter at safety and finishing second on the team with 69 tackles and tying for first with three interceptions.

Panthers tune up for crucial game

Bats away: Jemison’s Kyle Dennis, above, tosses his bat toward the dugout after taking a walk during Tuesday’s game. Jemison... read more