Devils have high hopes for season 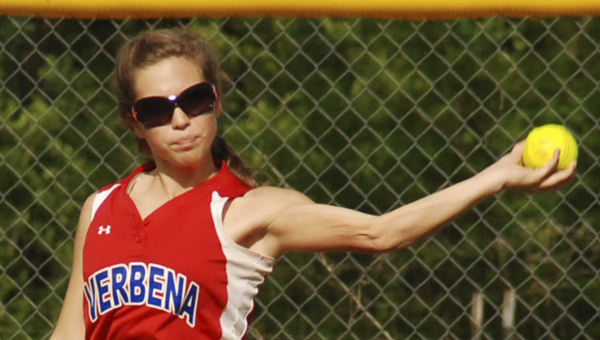 Going for the goal: Outfielder Mattie Cleckler is one of four returning starters on the Verbena softball team.

Despite having only one senior and “quite a few new faces” on the team, Verbena softball coach Jennifer Ingram said her young team has loads of potential.

“[I’m] excited at the possibility of this season,” she said. “I have a lot of confidence in the girls coming up.”

The Red Devils have only four returning starters from last year’s squad, but all are key pieces on the defensive side of the ball. Outfielder Mattie Cleckler and shortstop Ashlie Shiers will return to their respective positions, while it is still undecided if infielder Allyson Brown will be moved from second base to third base.

The anchor of the defense, pitcher Chanin Hancock, will be taking the mound for her third year in a Red Devils uniform. Despite only being in ninth grade, Ingram says Hancock’s veteran status on the field can help set an attitude for the team.

“It definitely helps having a pitcher with experience,” said Ingram.

Adding to the excitement of the new season are the improvements to its playing field. Verbena removed the all-grass infield and added dirt for the first time and is in the process of adding lights to the field.

The Red Devils last season won a tournament hosted by Isabella, and Ingram said the experience gave her team a “taste of winning” that will hopefully lead to success this year.

“We really feel we’ll get past the area tourney and go to Troy,” she said. “Last year, we were within one run of it.”

Thorsby’s baseball team won its first game of the year, 8-1, at Verbena. The game was called in the top... read more