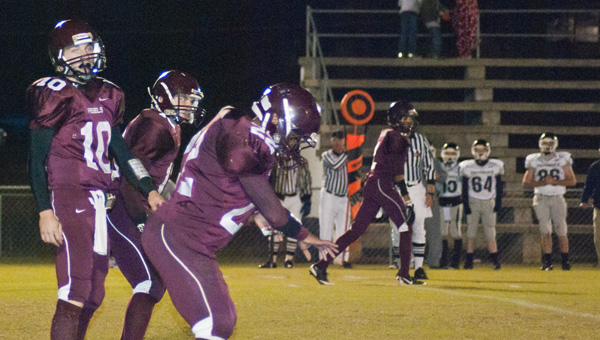 Ready to go: Thorsby quarterback Andrew Farris looks to the sideline for a play call during the Rebels’ playoff loss to Providence Christian on Friday.

THORSBY – One of Thorsby High School’s greatest football seasons ever came to a disappointing end against Providence Christian Academy on Friday in the first round of the Class 2A state playoffs.

PCA’s defense shut out the Rebels offense, which had been explosive most of the season.

The Eagles’ first score of the game came with 1:48 left in the first quarter when PCA sophomore Kyle Eriksen ran the ball in from the 17-yard line.

The Eagles (8-3) had the ball again and a 6-0 lead when the first quarter came to a close. The Eagles drove the ball all the way to the Rebels’ 18-yard line but were forced to attempt a field goal. The 35-yard try was good by Eagles senior Banks Smith.

The Rebels (8-3) had the ball with 1:01 left in the half after a PCA three-and-out. On the first play of the drive, THS mishandled a handoff and fumbled the ball. PCA’s senior Garret Nix recovered the fumble.

The Eagles took advantage of the Rebel mistake when Sterling Gatlin III scored on a 3-yard touchdown run. The Eagles led at the half, 15-0.

The Rebels got the ball to begin the second half, but THS’s drive was ruined by Gatlin III’s second interception of the game.

The Eagles’ next drive ended with their last score of the night, a 28-yard field goal by Smith with 2:00 left in the third quarter.

The following Rebel drive was ended when Eriksen picked off a third down pass.

The Eagles’ next drive went into the fourth quarter and PCA had the lead 18-0. The drive ended when THS sophomore Bo Hoffman recovered a fumble with 10:45 left in the game.

The Rebels’ next drive included a 14-yard pass where Farris completed a pass to junior wide receiver Stephen Mims that made up for a penalty that put the Rebels 24 yards away from the first down marker. Two plays later, Farris completed his final pass at THS, which was caught by senior Marcus Bray, who was Farris’s favorite target in his three years as a starter. Bray made the 5-yard catch on 4th-and-4 by dragging his feet to stay inbounds. The Rebels’ final offensive drive of the season ended four plays later with 8:11 in the game.

The Eagles killed the rest of the clock and advanced to the next round of the playoffs. They will face Cottonwood next week. The Eagles offense was led by senior running back Banks Smith, who had 138 yards on 24 carries. He now has rushed over 1,000 yards for the season.

Thorsby coach Billy Jackson said that his team went “above what we all thought we had.” The Rebels’ eight wins this season was a complete turnaround from last season, when they lost eight games.

Getting ready: Isabella coach Scott Booth talks to his team Thursday as it prepares for a playoff game in Cottonwood.... read more