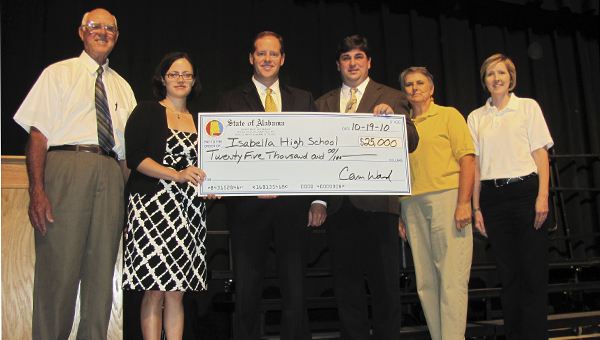 A full upgrade to Isabella High School’s computer and technology equipment is expected to be set up and running by January thanks to a $25,000 grant.

A full upgrade to Isabella High School’s computer and technology equipment is expected to be set up and running by January thanks to a $25,000 grant.

The equipment being purchased with the grant will be used directly for classroom instruction and comes at a time after school technology budgets have been drastically cut because of proration over the last two years.

“Earlier this year I had the opportunity to tour Isabella and it was apparent how desperately they needed these upgrades,” said Cam. “The faculty and staff at the school have worked very hard to bring about the best education possible for their students and they deserve 21st century technology to achieve this goal.”

Ward secured the grant after working closely with the Office of Governor Bob Riley, Porter and the faculty at Isabella High School.

Porter received the grant and thanked Ward for his work.

“Representative Ward was prompt in taking the initiative to help out the school,” said Porter. “We are grateful for his support and look forward to a close working relationship with him in the future.”

The Public School and College Authority approved the grant in October, at the request of Ward.

“I have a lot of respect for the work done by teachers in our public schools on a day to day basis and hopefully this grant will bring them some relief from the burden placed on our schools by the current budget shortfalls,” said Ward.

“Teachers can check out a cart of 25 or 26 to do whole group projects or they can check out one or two at a time for small group lessons,” said Porter. “We were very excited when Representative Ward called and told us we were approved. It was excitement for the students and teachers and is going to provide some much needed technology for the students – especially on the elementary end of the buildi