Verbena not close to Wadley this time 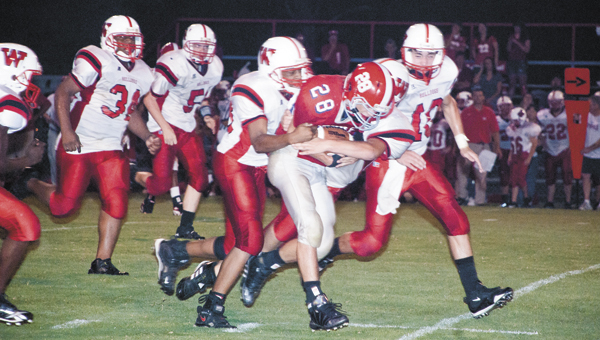 Verbena's Dustin Short was the lead rusher Friday night for the Red Devils.

Verbena and Wadley’s contest Friday night had many more points than last year’s 3-0 affair; unfortunately, most of the points went to the visiting Bulldogs.

The Red Devils lost 48-24 in their 2010 home opener — the second consecutive loss to regional foe Wadley.

The Bulldogs scored early from their first play of scrimmage — a 61-yard touchdown pass from Ryan Siskey to Wesley Johnson  — and often in the first half.

Wadley enjoyed a comfortable 35-0 lead at the break. Verbena wouldn’t score their first points of the night until midway through the third quarter.

Christian Coston played under center for the remainder of the gaming, leading Verbena to three touchdowns and three successful two-point conversions.

Despite being shutout in the first half, Verbena was able to run the ball most of the game, racking up 387 yards on the ground. Dustin Short led the team with 130 rushing yards.

Red Devil running back Marquez Deramus found the end zone from 13 yards out with 8:08 to go in the third quarter to get his team on the board, 48-6.

Verbena would add two more scores in the fourth quarter, via a 10-yard run by Coston and a 12-yard run by Deramus, to cap scoring at 48-24.

Verbena (0-2, 0-1) travels next week to Notsulga in another regional match-up.

When Kalup Nunn first hurt his knee last season, in Week 9 against Hale County, he was bummed about missing... read more