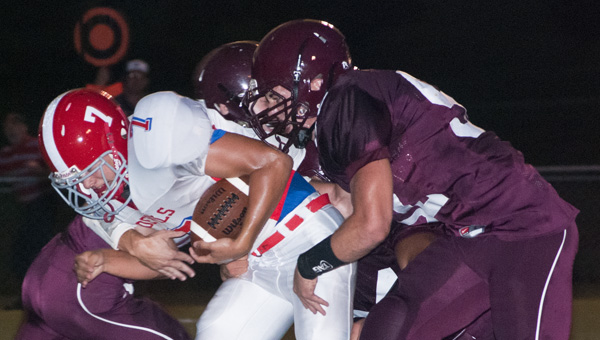 THORSBY – The Thorsby Rebels on Friday showed just how far they’ve from year one to year two of coach Billy Jackson’s tenure with a 33-6 win over Verbena.

Last season, Thorsby’s meeting with its county rival in Week 1 resulted in a hard fought 14-6 loss. This season’s opening game was the Rebels’ coming out party.

“We’re not there yet by any means,” coach Billy Jackson cautioned, but he did note his team’s improvement and credited that improvement to his coaching staff, especially strength coach Keith Williams. “They’ve got confidence in themselves because of the time they spend in the weight room.”

Thorsby is now halfway to its 2009 win total with nine games left to play.

Verbena, meanwhile, heads into region play next week against Wadley still with many questions to answer.

The Red Devils moved the football well on occasion behind the running of junior quarterback Bay Lucas (who led the team with 58 rushing yards, unofficially) and backs Dustin Short and Kelly Dorsett, but mistakes cost the visitors.

Verbena finally scored with 1:13 left on a three-yard run by Dorsett, a senior, but the game had been decided much earlier.

Thorsby senior Marcus Bray intercepted a pass on Verbena’s first possession and ran it back for a touchdown, and Eduardo Rico added the extra point.

Neither team could take control until Thorsby senior quarterback Andrew Farris led his team on a 91-yard drive that cumulated with Farris faking a handoff and running it up the middle three yards for a score with 16 seconds remaining in the first half.

The hosts ended any suspense on their first possession of the second half when, on third down with 13 yards to go for a first, Farris found Bray across the middle and then watched the receiver break several tackles and race down the sideline for a 50-yard touchdown.

Thorsby scored later on a beautifully executed reverse pass from Farris to a wide open junior Stephen Mims and on a fumble recovery in the end zone by senior Dylan Crocker.

Most Isabella football fans know that Friday will mark the official beginning of coach Scott Booth’s second stint at the... read more