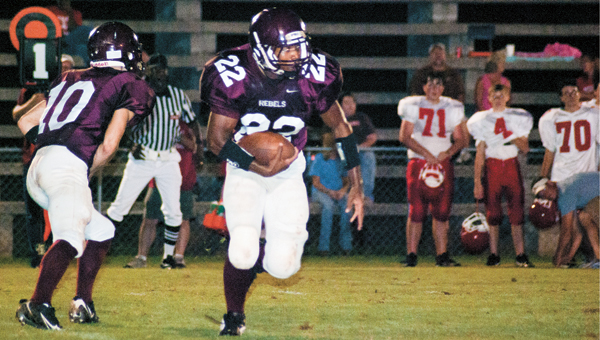 The second-string teams played 24 minutes first, with the Rebels winning, 13-6. After the break, the varsity starters squared off for another 24 minutes, which saw Thorsby come back to win, 8-7.

During the second scrimmage, both teams turned the ball over. Thorsby gave up two interceptions, including one in the end zone, but Dylan Crocker recovered a Tiger fumble that led to the Rebels’ game-winning touchdown.

West Blocton scored earlier in the second scrimmage off a short run by Justin Clements with 19:12 to go in the half.

Thorsby wouldn’t answer until 2:15 to go in the game with a 23-yard pass from quarterback Andrew Farris to Stephen Mims.

Despite the interceptions, the Rebels had several big offensive plays. A reverse to Marcus Bray gained 54 yards on Thorsby’s first drive. Kalup Nunn and Farris had several nice runs.

During the first half, backup quarterback Nathan Oldroyd completed his first seven passes, many of them to receiver C.J. Melendy.

Oldroyd had an 8-yard touchdown run. Bo Hoffman also ran in from 3 yards out to account for the team’s second touchdown of the first scrimmage.

B.B. Evans had a 49-yard reception in the game, while Hoffman had a 37-yard run.