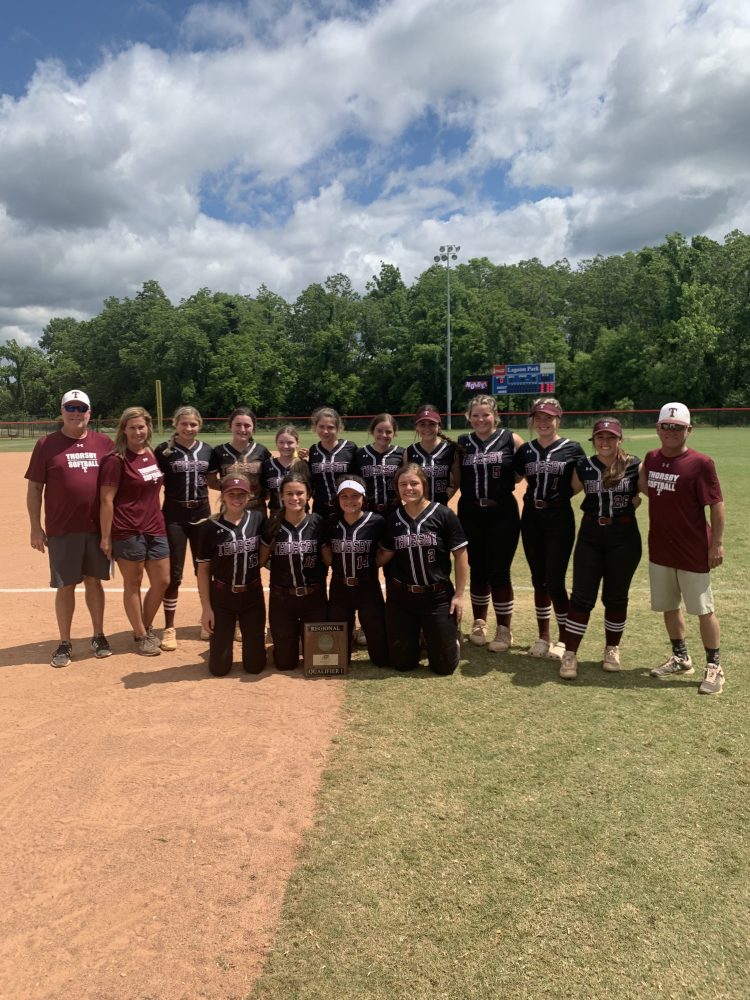 The Thorsby High School Rebels captured the AHSAA Class 2A Central Regional softball title at Lagoon Park in Montgomery on May 12-13. The Rebels rattled off three wins in a row to stay in the winners bracket the whole tournament and take the first state tournament qualifier position.

“Our goal going in was to stay in the winners bracket,” Thorsby coach Holly Matson said. “All week at practice we talked about how we need to execute, do the best we can and hit the ball well – and that is what we did.”

The Rebels bested Horseshoe Bend High School 11-3 in their first game on May 12. Senior Lindsey Burnett was in the circle for the Rebels and went the full seven innings surrendering six hits, three runs and struck out three hitters.

Both Burnett and sophomore Makinley Turner have been staples in the Rebels pitching circle this year. Matson is strategic about when to throw each of them. Burnett tends to pitch more to contact, while Turner has more speed and rotation on her pitches. This gives Matson the ability to mold the rest of the Thorsby defense around which pitcher is going that day.

“They’ve both done such a great job this year,” Matson said. “They’re both such great pitchers.”

Turner led the Rebels at the plate against Horseshoe Bend going 3-for-4 with two doubles and three RBIs. Autumn Edwards and Brooklyn Reeser each had two hits in the game.

“When we come out and hit the ball like we did, we are hard to touch,” Matson said. “It makes all the difference for us when we’re hitting the ball well. We’ve picked it up at the right time around the playoffs.”

Thorsby moved on to face Luverne High School and threw Turner who went the full seven innings and gave up seven hits, one run and struck out 11 hitters. Burnett drove in two runs to propel the Rebels to a 3-1 win.

Thorsby came into May 13 needing just one win to secure a spot in the state tournament. Matson said for the first time all season, she heard her players express feelings of nervousness in the dugout before the game.

“I told them ‘We are good,’” Matson said. “We just needed to go out and play Thorsby softball, and have fun doing it like we have all year long.”

Thorsby jumped out to a 5-0 lead over Randolph County after the fourth inning, and Turner pitched arguably her best game of the year going the full six innings and surrendering just three hits, one run and struck out 13 batters.

Randolph County got a run in the top of the sixth inning, then Thorsby hung six runs up in bottom half of the inning to end the game 11-1.

“They did make it look seamless, but they put in a lot of hard work in practice,” Matson said. “Last week, we really worked on our hitting and fielding a lot and want to do the same thing this week going into the state tournament.”

Turner was 4-for-4 at the plate with two triples and drove in a run. Eight of the nine Rebels hitters in the lineup got a hit. Edwards led Thorsby with four RBIs.

Thorsby is going back to the softball state tournament for the first time since 2019, and Matson hopes to send her seniors out with a state title.

“I feel like if we take that momentum and the positive attitudes with us from Friday’s game into the state tournament, I feel like we have a great chance at doing well at state,” Matson said. “Looking at states now, it is the same goal of one game at a time.”

Thorsby will take on Long High School at 9 a.m. on May 20 at Choccolocco Park in Oxford in the double elimination tournament.