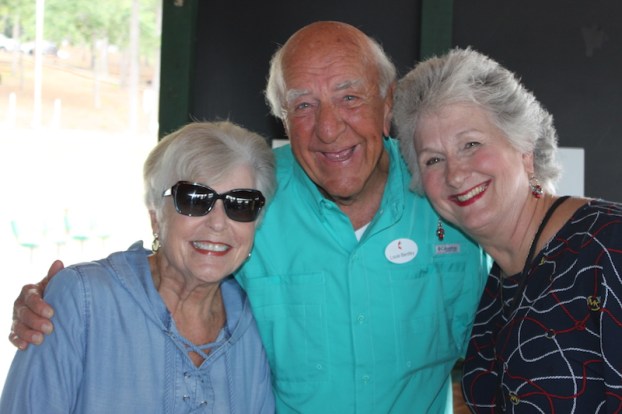 Fun breaking out on Lake Mitchell

The restrictions of social distancing lifted in time for families and friends to celebrate on the water this summer.

You can hear the sounds of laughter and squeals of delight as children ride tubes and others ski or wakeboard. Fishermen share the same enthusiasm but are not as verbal except when they catch a big one and have bragging rights. Besides hearing boat motors, we are hearing the hum of saws, and the pounding of hammers and other common construction sounds. Many are rebuilding boathouses and piers after the storm from the hurricane in October or the tornado in March. Some are still working on rebuilding their homes that were severely damaged by one or the other storms. New construction has started on the Coosa side where 17 lots have been put up for sale. One has sold, and the house is already being framed in. Excitement is in the air all around the lake in one way or the other.

On June 5, HOBO held their annual picnic, and everyone was so excited to be together again. There were sounds of laughter and talk. Some people had not been together since 2019 and there was much catching up to do. HOBO furnishes the meat and drinks. Those attending bring a side dish or a dessert.  There is always great food and lots of good fellowship. Approximately 60 to 100 attended counting children and one puppy dog.

The Fourth of July weekend is coming and we celebrate our American Independence this year along with HOBO’s 25th Anniversary. The HOBO fireworks will be July 3 at 9 p.m. in the mouth of Cargile Creek. The fireworks by HOBO was organized by Jim McCormick, and he had a crew of volunteers to set up in his yard and help him fire them off each year. Year after year as people began to contribute to the cost of a great fireworks show it only got bigger and better. This year the Pyro Crew will spend about 10 hours in advance setting up for this spectacular show. There will be patriotic music playing over some monster speakers while the fireworks light up the sky above Lake Mitchell. We have been told they reach from 300 to 600 feet into the sky. Come early by boat to the mouth of Cargile Creek to claim your spot for an amazing fireworks show.

There are other activities going on around the lake that have been planned by individuals or families. There will be a fireworks display in Cargile Creek two doors down from Grace Marina on July 4 at 9  p.m. You can bring your own chair and sit at Grace Marina to see this show but there is limited parking. Come early by boat to get a front row seat. It will be great fun for all.

The fun around the lake all starts on July 2 when the Belcher family will have the band Government Cheese performing from their upper dock. They will go from 6 to 11 p.m. The Belchers invite you to come listen from your boat.

The Fourth would never be the same without the pontoon boat parade. There are usually 20 to 35 boats decorated with flags and banners and even a life size Uncle Sam on one. People and dogs are dressed in red, white and blue. Although no certain group sponsors this parade Trip Janney has obtained the permit for the parade. Anyone with a decorated pontoon boat that is in full compliance with all marine safety regulations may participate. Just meet at Higgins Ferry at 10 a.m. and get in line. The parade travels South to Cargile Creek and on to Blue Creek and back North down Coosa side before dispersing. There is a 2 p.m. speed boat parade, and they all have flags waving but you best not blink or you will miss this one. They travel very fast from Blue Greek to Cargile and North to Higgins Ferry on the Chilton side or really in the middle of the lake.

We are blessed to be Americans and live in the USA. Our Independence was not free and we are forever grateful for those who gave their time and some their life so that we may even have this time to celebrate. God Bless the USA!

OPINION: Sometimes it’s not about the title

By JOYANNA LOVE/Managing Editor It was exciting to be a part of Peach Festival history on June 24 as Halle... read more