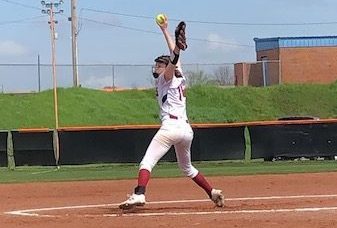 Lexi Smith won all four starts of her starts this week, including a 5-0 shutout over Verbena. (JEANNIE REYNOLDS-SMITH/CONTRIBUTED)

This week’s athlete of the week is Lexi Smith, starting pitcher for the Maplesville High School Varsity softball team.

In the Verbena softball tournament from Feb. 26-27, Smith pitched three games, giving up just six total runs in the three starts. She also notched an impressive shutout against Verbena, giving up just five hits while striking out four batters in the contest.

Following the tournament, Smith made another start on March 4, a 13-1 victory over Montevallo High School. Smith pitched five innings, giving up just one run off four hits with zero walks and four strikeouts.

In his first victory on Feb. 27, Cohn threw all seven innings in a 4-2 win for the Tigers over Oxford High School. In the game Cohn gave up two runs, zero earned, off just four hits, allowing zero walks while striking out eight batters. In his second start of the week on March 4, Cohn threw a two-hit shutout against Trinity Presbyterian, giving up just one walk while striking out a whopping 14 batters.