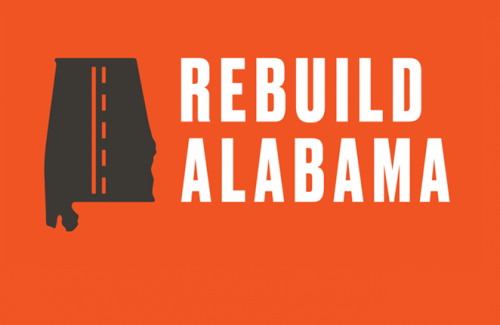 Logo courtesy of the Office of Governor Gay Ivey.

The Clanton City Council has approved its transportation plan to renew the Rebuild Alabama tax funding it receives.

The Council voted unanimously to renew and listed paving a portion of Enterprise Road as what the revenue would fund. According to City Clerk Debbie Orange, the city will receive $57,060 in revenue from the Rebuild Alabama gas tax increase this year. The funding rate is determined based on population of the city relative to all the other cities.

The Increase was spread out with a 6-cent increase in 2019, followed by a 2-cent increase set for Oct. 1 in 2020 and 2021. Starting in 2023, the rate would be adjusted every other year based on the “percentage change in the yearly average of the National Highway Construction Cost Index (NHCCI) issued by the U. S. Federal Highway Administration (FHWA) for the most recent 12-month period ending December 31, compared to the base year average,” according to the Rebuild Alabama Act.

The Council also approved a new plan for retirement benefits for employees.

Alabama has recently opened the opportunity for municipalities to return to offering Tier 1 benefits to their employees.

“It will increase their retirement benefits, and the city will absorb about $12,000,” Mayor Bobby Cook said.

Orange said all employees hired since 2013 have been on the Tier 2 plan.

Councilman Jeffrey Price, who had researched the opportunity for the Council, explained that Tier 1 was “a good hiring tactic … that’s the biggest thing.”

“They get better retirement instead of 33% of their check, it’s 50% (for Tier 1) and they can retire after 25 years, rather than waiting until 62 (years old), which creates an earlier retirement and we can rehire someone at a lower cost … in the long run it is financially neutral,” Price said.

He said it also helped the disability insurance for the fire and police department employees.

A late defensive stand by the Maplesville Red Devils cemented a 28-20 victory at home in the 2020 season opener... read more