Season ends on the road for four local teams 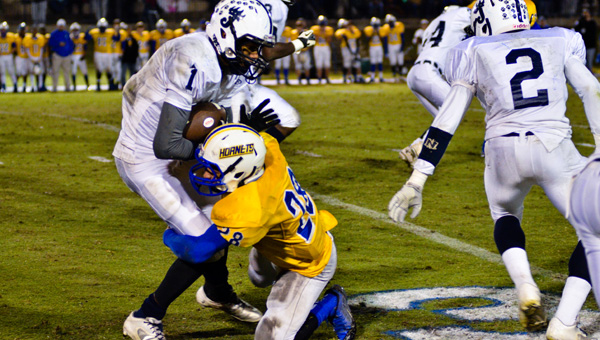 Standing in their way: Randy Satterfield (1) and his Jemison teammates ran into a roadblock Friday in the form of Mike McDonald and Beauregard.

Four of the five local high school football teams competing in the postseason had their season come to an end Friday with a loss on the road in the first round the state playoffs.

Jemison fell at Beauregard, 44-16, fading after the first quarter of play.

A first-quarter Jemison interception was returned to the 3-yard line, and then Beauregard quarterback Walker Meadows punched it in for an early 6-0 lead.

Jemison’s Shawn Poe recovered a fumble on the ensuing kickoff, and on the next play, quarterback Kevin Nunn passed 20 yards to Randy Satterfield, leaping over the Beauregard defender, for a 9-6 JHS lead.

It would be the last points for the Panthers (7-4) until the game was out of hand.

Beauregard (9-2) tied the game on a 33-yard field goal by Thomas Scott, then the Hornets reeled off two long scoring drives, of 87 yards and 90 yards, relying on a rushing attack that featured healthy doses of Meadows keeping it himself.

“We moved the ball effectively in the first half,” Hogan said. “They moved it more effectively.”

Jemison turned the ball over on its last two possessions of the first half and went to the locker room down 23-9.

The Panthers couldn’t manage a first down on their first possession of the second half, and then Mike McDonald delivered what could have been the knockout blow with a 60-yard punt return for a touchdown.

Jemison cut the lead to 14 points on a fake field goal pass from Tremon Bryant to Brandon Kornegay, but Beauregard answered with 2-yard rushing touchdown by Meadows and then a scoring strike from Meadows to Dequavius Collins.

Poe paced the Jemison defense with 10 tackles, an interception and the fumble recovery.

“This senior class is a special group,” said Hogan, moments after concluding his first season as head coach by consoling several distraught players. “We came in the first of the year and said we wanted to lay the foundation for something special, and I think they did that. I couldn’t be any more proud of them.”

Bryant Horn was the star on the night, overcoming a up-and-down first half of play to throw for five scores on the Tigers’ defense.

The Wildcats’ defense was the story early on, as it pressured Chilton County quarterback Trenton Bishop into mistakes that put the Tigers in a hole less than 5 minutes into the game.

Red Devils dispatch Marengo in Round 1