No gasoline found in soil at Thorsby park

No traces of gasoline have been found in the soil at Richard Wood Park following a leak at a fuel station across Highway 31.

PRE Inc. is performing remediation at the site of the leak, Mystic Mart, and was granted permission by Thorsby Town Council in March to dig monitoring wells at the edge of the park. 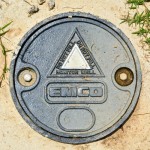 Well cap: Two wells have been dug at Thorsby’s Richard Wood Park to test for the presence of gasoline in the soil.

Simmons said PRE will continue monitoring the park’s two wells, possibly for several years, and cleaning up soil and groundwater at the site of the leak, as it has since February 2012.

The site is cleaned by pulling soil and groundwater out of 22 wells at the fuel station property, treating the soil and water and then returning it to the ground.

A “environmental site assessment” at the fuel station in late 2010 discovered there were gasoline components in the groundwater, Simmons said.

Simmons said the assessments, and finding gasoline in the soil at fuel stations, is not unusual.

He said there’s usually no way to tell how the gasoline got into the soil.

“We don’t really know how it got in the ground,” Simmons said. “You can’t see below ground, so everything is a guess, other than it has something to do with [the underground storage tank]. You don’t know what part of it had the problem; you just see the symptoms.

Simmons said testing the soil at the park is an effort to determine how far the gasoline could have traveled in the groundwater.

“We found the end,” he said. “There are no levels that are above groundwater criteria.”

The Chilton County Sheriff’s Department is gearing up for the second women’s educational class this month, with the focus this... read more