Mr. Dunn celebrated his 92nd birthday in February, and Mrs. Dunn will turn 91 in December. They have been volunteers at the Huxford Senior Center for many years. They are a vital part of the center and are there almost every day. 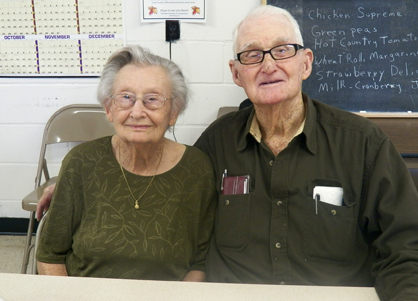 Annie Dunn worked with JU Blacksher School for 10 years as a teacher’s aide and worked in the cafeteria, along with being a housewife, a mother and a helpmate to her husband. David Dunn was raised on a farm where he lives today. His first public job as a young man was with Med Alexander stump wooding. He worked then with Doc Caylor pulp wooding, and then with the shipyard in Mobile. In 1951, they moved to Evergreen and worked with the Alabama Highway Department about 15 years and then moved back to Uriah and worked another 15 years with the highway department. When he retired in 1998, they moved to Chilton County and lived for six years before moving back home to Uriah.