A 65th wedding anniversary celebration for Billy and Earline Gregg of Stanton was held June 26 at Ebenezer Baptist Church in Stanton. 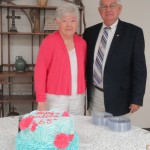 The celebration began with the pastor, Danny Rasberry, recognizing them and focusing his sermon on commitment.

The music director, Delina Lenoir, led the congregation in some of Billy and Earline’s favorite songs.

The church and fellowship hall was beautifully decorated with flowers provided by friends Mike and Judy Walls.

After the morning worship, family and friends provided food, which was shared in a time of fellowship with the couple.

After the meal, everyone enjoyed anniversary cake, followed by a time where different family members and friends shared memories with tears and laughter of their times spent with Billy and Earline over the years.

This couple has displayed a great example to the people of Ebenezer Baptist Church of the way a Christian marriage should be.