More than 300 law enforcement agency badges hang in Empire Deli and Bagel's restaurant in Leland, N.C., including the town of Thorsby.

Leland, N.C. is about 600 miles away from Thorsby — but the two towns share a special link. 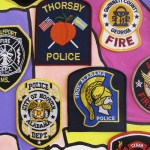 Along with Thorsby, badges from Hoover and Troy represent Alabama on the map.

A local restaurant in the town outside Wilmington sent letters and emails to law enforcement agencies across the country earlier this year hoping to get one badge from every state.

Thorsby sent one of their badges, and Mayor Dearl Hilyer learned recently it was included on Empire Deli and Bagel’s map that has badges from all 50 states. Two other Alabama departments are also included on the map: Hoover and Troy.

Empire decided to put up the wall to celebrate the deli’s first anniversary and thank all the law enforcement officers and emergency workers who eat there.

The goal was to get one badge from every state, but the restaurant received many more than 50. In all, 300 badges were received.

One hundred and thirty seven of the patches made their way on a 4-by-6-foot map. The rest are on two other canvases — one with an additional 50 state patches and another with 58 patches from North Carolina departments. Other patches line the roll behind the restaurant’s counter.

The map has been featured on local television in North Carolina since it was put up July 12.