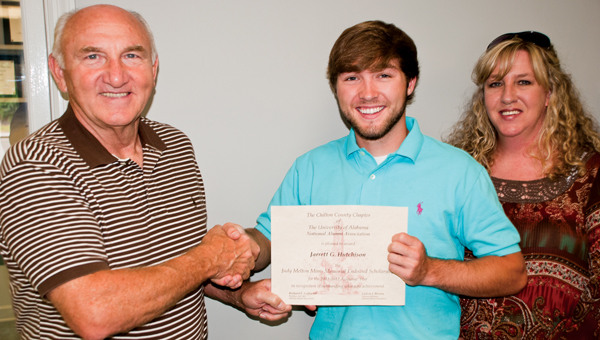 Troy Mims, left, presents the scholarship to Hutchison, standing by his mother.

Hutchison is the son of Jarrett and Jacie Hutchison and is the second recipient of the scholarship.

The scholarship was named in memory of a longtime educator because of a contribution made by her husband, Troy Mims, to the Chilton County Chapter of the University of Alabama National Alumni Association’s scholarship fund.

“He’s a well-rounded student,” said Troy Mims, who added Hutchison was selected because of his strong academics and leadership exhibited in both the school and community.

Hutchison said he has wanted to attend the University of Alabama since he was in kindergarten.

“My parents always told me to follow out my dream,” he said.

When asked what field of study he would pursue, Hutchison mentioned orthodontics and dentistry.

“It just seems like something I would enjoy, helping kids feel happy,” he said.

His mother confirmed this, also calling him a “tooth fanatic.”

Hutchison plans to begin attending UA in the fall of 2011.

Thanks were expressed to his parents, Troy Mims, JHS counselor Lacretia Waters and teacher Lori Peoples.