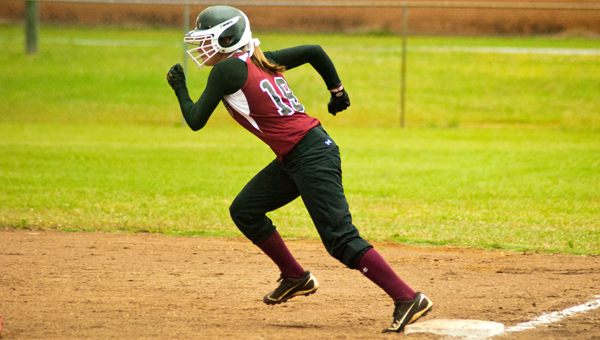 And she’s off: Maplesville’s Autumn Smith takes off from first base during a game Tuesday.

Maplesville and Verbena will finish their softball area tournament Wednesday after rain Tuesday forced the suspension of the championship round.

Host MHS had defeated the county’s other set of Red Devils, 10-0, earlier in the day and led 6-4 with one out in the top of the fifth inning when the rain became too heavy to play through.

The game, part of a double-elimination tournament, will resume at 3 p.m. Wednesday.

The postponement should bring some relief for VHS, which was playing in their fourth game of the day Tuesday.

Verbena defeated Autaugaville, 16-5, in the first game of the day before losing to Maplesville and then staving off elimination with a 27-0 win over Autaugaville.

Chanin Hancock walked with two outs in the top of the first inning in the second game between the county rivals and advanced to third base on a deep hit to the outfield by Victoria Fletcher.

Both Devils scored on a Destiny Tyus single.

Maplesville tied the game in the bottom half of the inning.

Morgan Little led off with a single, and Autumn Smith followed with another single to plate Little.

Smith scored on a two-out hit by Kiana Andrews.

The hosts took the lead in the third inning. Smith led off with a walk and scored when Courtney Killingsworth reached base on an error. Killingsworth scored on a Natalie Arnold groundout.

MHS added two more runs the next inning. Little singled and scored on a Smith hit, and Smith scored on a Killingsworth single.

Verbena cut the deficit in half in the fifth inning before play was halted.

Mattie Cleckler led off the frame with a triple and scored on a wild pitch. The next batter, Lakeyn Edwards, walked and scored one out later on a triple by Fletcher.

Smith is the pitcher of record for Maplesville, and Ashlie Shiers for Verbena.

Killingsworth and Andrews were the stars of the first game for Maplesville.

Killingsworth started in the circle and allowed only one hit (to Fletcher) and one walk while striking out eight batters.

MHS scored five runs in the first inning and five more in the fourth, and the game ended early, after five innings.

Andrews hit a triple and an inside-the-park home run in two at-bats. She scored two runs and drove in five runs.

Maplesville advances to third playoff round