18 years of Relay For Life 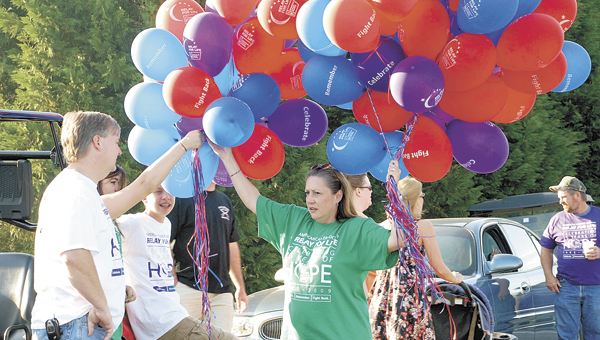 Relay For Life, the signature fundraiser of the American Cancer Society, is described on its website as a “life-changing event.” Anyone who has ever been a Relay volunteer would wholeheartedly agree.

Relay For Life reaches people in the very communities where individuals and families are affected by cancer. As life shattering as cancer is, Relay seeks to reverse these effects by raising money to find a cure. It also allows people to celebrate the lives of loved ones who have battled cancer.

“Unfortunately, we have a high rate of cancer here in Chilton County,” said Ann Glasscock, currently the chairwoman for Relay’s Chilton County committee.

Glasscock became involved about 16 years ago and has lost both her mother and a grandmother to cancer. Through the organization, she has found both solace and a way to fight back against the disease.

“Chilton County is just such a loving, giving community. Relay is just one of the many organizations we support,” Glasscock said.

Relay For Life began in 1985 at a track in Tacoma, Wash., where colorectal surgeon Dr. Gordy Klatt walked for 24 hours to raise money for the American Cancer Society. This one man’s passion soon spread worldwide and inspired people to organize similar efforts.

Prior to becoming chairwoman, Hand was a volunteer for Relay and participated in a program called Reach to Recovery, in which breast cancer survivors help others who are facing the same battle.

Hand recalled the first year for Relay locally, when there were only five fundraising teams:

“It was just a simple thing. We did stay all night, and we raised $9,300 for the American Cancer Society,” Hand said.

That amount would increase nearly every year, and today Hand continues a role coordinating survivors’ activities throughout each Relay campaign.

“It gives me satisfaction to know that I am a small part of raising money that goes toward research that may one day find a cure for cancer,” she said.

In 2007, Robert Griffin, the pastor of Highland Baptist Church, was asked to take over as chairman and served for three years. Griffin had been involved in the committee as logistics chairman since 1997, and Highland Baptist was among the first fundraising teams.

“Our church has a lot of cancer survivors, and we’ve also lost a lot of members, so it’s a way to help them. It’s a way to encourage them,” Griffin said.

Not only has Griffin worked on the division level; he also serves on the state Relay council and will be the state chairman in 2012. He served for four years on the Mid-South Division training team, attending national summits and helping to train volunteers in Alabama, Tennessee and Kentucky. The training consists of logistics, sponsorship, leadership, fundraising and team development.

“The American Cancer Society is so good to their volunteers,” Griffin said.

In its 18th year, Chilton County’s Relay For Life has grown from approximately 10 fundraising teams to more than 60 teams. In 2007, the event was moved from Goose Pond Park to the Clanton City Park youth league football field, where there is more space for campsites and entertainment.

Participating teams camp out overnight, and each team’s members take turns walking or running around the track because cancer never sleeps. The first lap, called the “survivors’ lap,” is walked by cancer survivors and their family members. In recent years, the Chilton County event has drawn 100-plus cancer survivors.

“There are many more in Chilton County we are not reaching with Relay, and we would love to get them involved,” Griffin said.

The driving force behind Relay, Griffin said, continues to be the search for a cure. In 2010, local volunteers raised nearly $200,000 toward this cause. This year, they hope to raise even more.