Davis sworn in for second term 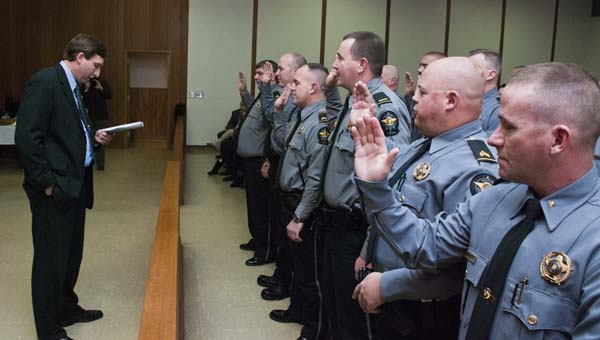 In the swearing in ceremony Tuesday for his second term in office, Chilton County Sheriff Kevin Davis made residents a promise.

“You will be prouder of your sheriff’s department in four years than you are today,” he said.

Davis, 36, was sworn in by Probate Judge Bobby Martin shortly after 9 a.m. at the Chilton County Courthouse, and Davis then re-deputized 43 members of his department.

Davis, running on the Republican ticket, was re-elected in the November 2010 General Election, 74.1 percent of the vote to 25.2 percent for Democrat challenger Terry Wilson.

The sheriff said he was “truly honored” by voters giving him another term.

“It’s a blessing to serve as sheriff of the county,” he said.

Davis also made promises to his deputies (to provide equipment and supplies for them to do their jobs successfully), his family (to be a better son, husband and father) and to God (to be a better Christian).

“If we’re not striving to be a better Christian tomorrow than we were today, then we need to check up—and I challenge you to do the same,” Davis told the deputies.

Davis closed his speech by crediting his political success to his wife, Sweet, saying she makes up for his political deficiencies.

“I’ve got the best politician in the county on my side,” he said. “I don’t think anybody can deny that I wouldn’t be here today if it wasn’t for her.”