Maplesville loses in 3rd round of playoffs 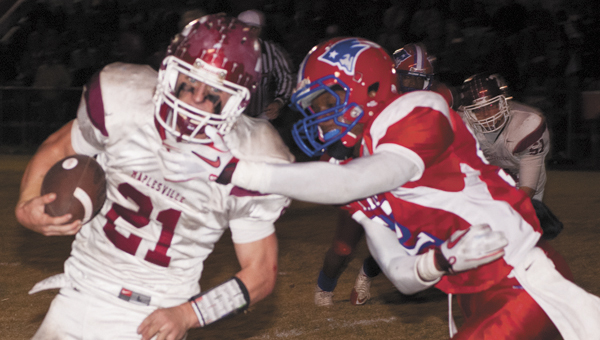 Slow going: Maplesville’s Hunter McCay, left, runs for yardage in a loss at Linden on Friday. McCay scored one of the Red Devils’ two touchdowns while rushing for 63 yards.

Maplesville’s season came to an end Friday with a 45-13 loss at Linden in the third round of the state football playoffs.

In so many ways, the top-ranked Red Devils (12-1) played unlike they had all season, a fact that can probably be mostly contributed to a talented Linden (12-1) team was ranked third in the state in the final Alabama High School Athletic Association poll and lost only to rival Sweet Water, the fourth-ranked team.

An MHS defense that had shut out eight of its 10 regular season opponents allowed a season-high 45 points, 19 in the first half.

And a Devils offense that averaged 50 points per game was shut out in the first half while managing only three first downs at Linden Athletic Field.

Maplesville twice moved the football inside Linden’s 20-yard line in the first half only to turn the ball over—on an interception in the end zone by Linden senior Najee Bright 1 minute into the second quarter and on a turnover on downs with about 5 minutes left in the first half. 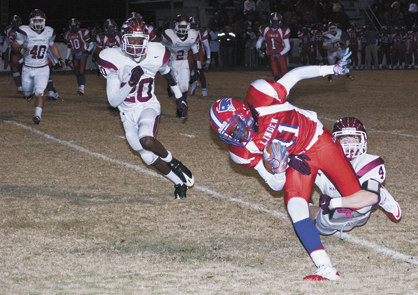 Hang on: Maplesville’s Blake Crumpton hangs on to bring down Linden receiver Najee Bright. Crumpton intercepted a pass later in the game and returned it for a touchdown.

The final score of before the break followed a Maplesville interception of a screen pass that was wiped out because of a roughing the passer penalty.

On a third-down-and-2 play, Linden senior Kendarius Fritts busted up the middle, broke some tackles, stiff armed a Maplesville defender and drug a couple of more into the end zone for a 28-yard touchdown run 3 minutes into the third quarter.

The visitors got on the scoreboard with 10:34 left in the game, when senior Hunter McCay scored from 2 yards out to conclude a drive that had been dominated by his runs. Casey Atchison’s point-after made it 25-7.

McCay finished with 63 yards on 16 carries.

Linden responded by giving the ball to Fritts for three consecutive runs that netted 68 yards. He eventually scored to make it 31-7.

With 7:57 remaining in the game, Maplesville senior Blake Crumpton intercepted an attempted screen pass and ran it back 40 yards for a touchdown. A fake extra point was unsuccessful for 2 points.

Fritts added his third touchdown run, from 25 yards away, with 4:31 left in the game, and a 30-yard pass play from Robinson to sophomore Shauka Reese concluded the scoring.

“I hope both of my sons grow up to be like just not the seniors, but the juniors, sophomores and everybody else on this team,” coach Brent Hubbert said. “These are great guys. It makes your job a lot more enjoyable to come to every day.”

Devils headed back to Linden with even more on the line

The Red Devils football team ate dinner with the Maplesville community Thursday evening, and a pep rally is scheduled for... read more